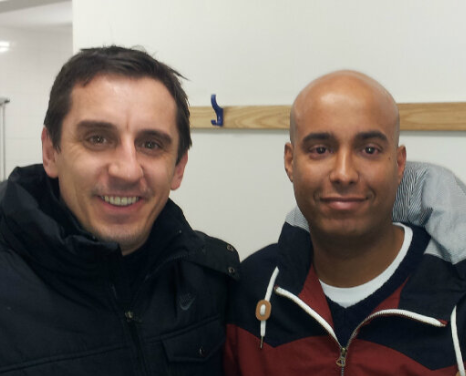 I’m afraid I’m going to have to cheat here a little bit because to be perfectly honest I can remember very little about my first ever United game. It was a drab 0-0 against Southampton sometime in the mid-eighties and my only vague recollection of it was that Peter Shilton was in goal for the Saints and Jesper Olsen did something memorable for United, although not memorable enough for me to actually remember what it was! In my defence I was only at infant school age during that time and the other games that made up my first trips to Old Trafford, so have decided to fast forward to the first game I can truly remember, that came in the Rumbelows Cup as it was known against the then mighty Liverpool.

My dad had been a regular at Old Trafford for years and the first times he took me we’d walked from our house in Stretford to the ground but by the time of the Liverpool game we’d move to another part of Manchester so had to drive, but ended up parking near our old house anyway, near the since demolished Kendal Sports Club.

I can still recall the excitement I felt all day at school, knowing that I was going to Old Trafford, for a cup game against the all conquering Liverpool. Growing up as a United fan I’d become used to seeing the Scousers lift countless trophies, their matches featuring frequently on the telly and many of their ranks making up the international sides.

I went swimming with school in the afternoon and I remember my best mate Ryan, somewhat jealously proclaiming: “United won’t beat Liverpool tonight, they’re too good, Barnes is amazing.” Ryan was a United fan, who even played for the boy’s team but seldom went to matches and was simply trying to pour water on the flames of my excitement as I’d no doubt done his head in banging on about my imminent visit to the match, getting more giddy as the day wore on.

To put things into context, this was the season after Sir Alex Ferguson- or just ‘Alex’ as he was known then- had delivered his first trophy, the FA Cup. I’d been five when United had lifted the trophy in 1985 and can barely remember it, although I do remember celebrations in the street around my house, so the 1990 win had been very special. I was getting to the age where I was beginning to understand the game better and Italia 90 had been something of a watershed moment as players like Toto Schillaci, Roger Milla and Gazza dazzled me and my mates during the Summer.

The match itself was and still is one of my favourite memories of being at Old Trafford, this was a time when the atmosphere was truly something special, particularly against old enemies Liverpool. I’d been to Old Trafford a few times by then, always on a weekday as my dad refused to take me at weekends claiming it was too dangerous, as the hooligan era hadn’t ended, nor had the racism you could still hear on the terraces – one could argue the latter still hasn’t to some extent.

Despite this being a third round league cup tie, arguably the most insignificant game you could think of now, Old Trafford was packed and for a ten year-old like myself it was akin to being in heaven as the roar of the crowd helped the game get underway. The game itself was a good old fashioned cup tie with both sides really going for it and the crowd delivering an equally memorable performance off the pitch. I remember there was a bloke stood in front of us – we were in what would now be classed as the West Stand Upper – and all he seemed to do was face the crowd starting chants and constantly geeing everyone up, like some form of Mancunian middle-aged cheerleader.

United took the lead through a Steve Bruce penalty, this was the season where the centre back seemed to score almost every game- in fact he bagged eighteen in total during that campaign, a phenomenal record. The thing that shocked me most of all about Bruce’s opener was my dad’s reaction, I’d never fully grasped the rivalry and even hatred between the two clubs, despite not liking Liverpool I’d not fully embraced the antagonism that would flourish in subsequent seasons. My dad jumped up and down on his wooden chair, not on the seat but the actual back of the chair such was his euphoria and naturally he wasn’t alone as the entire place seemed to be going completely mental. Nothing could prepare me for what happened next as Mark Hughes scored on of my favourite ever United goals. Skipping past two Liverpool players about 30 yards from goal, ‘Sparky’ fired a rocket that flew past Bruce Grobbelaar and sent Old Trafford, my dad, the cheerleader and myself  completely potty. It was a great goal and being there to witness it against Liverpool of all sides, with my dad next to me made it all the more special.

The second half saw Danny Wallace replacing Hughes who’d taken a knock. I remember Wallace bursting through on goal only to be cynically brought down by David Burrows- a move nowadays that would without doubt warrant a red card, a three game ban and a shedload of righteous indignation all over twitter, the Liverpool defender got a booking. It seems in those days you had to cause at least grievous bodily harm to make the referee even consider reaching for a red card.

United eventually went three up through Lee Sharpe who was arguably my favourite player at the time – he’d be replace by Paul Ince for a few seasons, before he broke my heart. Sharpe tormented the Liverpool defence all night and was playing at the peak of his powers despite being relatively young. The goal came at our end of the pitch and we had a perfect view as Sharpe rocketed his shot past the increasingly hapless Grobbelaar.

Ray Houghton grabbed a consolation, not that it mattered, United had been dominant against a side many fancied to win the league and who’d gone six months undefeated. Barnes, my mates golden boy hadn’t played, but I remember my dad pointing to some stud marks on the pitch and remarking: “look Barnes has been playing, he’s the invincible man again,” a reference to an ongoing Red Issue joke made after the winger’s anonymous performance in Italia 90.

Coming out of Old Trafford I managed to lose my dad, coming over the bridge from Old Trafford towards Railway Road I saw him hanging off a lamppost looking for me, it wasn’t difficult as I was floating on a happy, joyous scouse-defeating cloud. I may have been only ten years old but as my mind raced I wondered if I was witnessing the start of something special, maybe the dawning of a new era, kids do think some daft things sometimes…

Follow Justin Mottershead on Twitter and read more of his Manchester United related work. A new project of his, Pride of all Europe, is also worth a look.