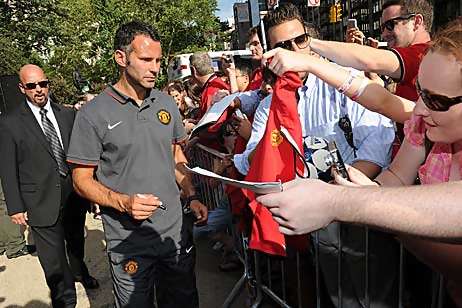 Manchester United is a universal brand. It reaches every corner of the earth. There are millions of people who cannot speak English, but they know Manchester United. They know Rooney, Ronaldo, Giggs, Cantona, and Charlton. But the difficulties of being a true foreign United fan should not be underestimated.

As a United fan living in South Africa, I have only seen the Reds play during pre-season tours in 2008 and 2012. It was a great experience, to see the likes of Scholes, Giggs, Rooney and Sir Alex in the flesh after years and years of watching them on TV. I think this is the biggest obstacle fans like myself face – United, as a football club and as an institution, is largely inaccessible. We watch the matches, but other than that, how are we really part of the club? We buy the shirts and scarves but unfortunately, these don’t quite measure up to being an Old Trafford regular. This is not the fault of the club and I’m not really sure if there is a clear solution.

Social media and increased PR efforts are two of the factors that allow us to experience more than we normally would, but we’re still largely disconnected from the club. Speaking as something of an outsider, I do not intend to generalise or categorise, but being able to interact with Mancunian folk through Twitter, as well as Jim White’s Manchester United : The Autobiography, has enabled me to see a bit more into the mind of the United fan living in Manchester. Opinion seems to be divided as to whether they really see the club as theirs. One thing is for certain, it’s certainly more their club than mine. They understand the culture of the club because it’s the culture in which they live. I can watch as many documentaries and read as many books as I want but will I ever understand United like someone who has the club as part of their community and culture? If anything, I am jealous of people who have an intimate knowledge and affection for the club because they share a city. I wish I could understand the real role that United plays in the life of the average Mancunian and I wish I could understand, and maybe even experience, the relationship between the club, the city and the people.

There’s also the great generalisation that people living in Manchester don’t support United – why people with even a slight interest (besides those living in the east of Manchester) would turn their backs on a worldwide phenomenon on their own doorstep is beyond me. If anything, I would have thought it would be the opposite – surely it would have made more sense for United supporters in Manchester to claim United as their own and be reluctant to accept international fans. However, from what I can gather, local United fans are happy to share their pride and joy from their own city with millions of faceless individuals all over the world, but maybe that’s because of the point that was made earlier – to live in or around Manchester means understanding the club in a way that an international supporter never could. It doesn’t necessarily have anything to do with passion, because there are bound to be fans around the world that are more obsessed with United than the average Old Trafford season ticket holder, but it has everything to do with understanding. Understanding the club leads to loving the club which gives a distinct advantage to local fans.

Then there’s the massive stereotype that all United fans are attracted to the club purely because of glory-seeking.  It’s difficult to be taken seriously. And undeniably, there’s an embarrassingly high number of ‘Man U fans’ who couldn’t tell you the team’s last result, or even tell you the name of United’s stadium, or still think that Cristiano Ronaldo and David Beckham are still Reds. The way I see it, these ‘fans’ are insulting real fans, both local and international – it takes real dedication to be a real fan, to develop a knowledge not only on United, but football in general. Often, when I see people sporting United shirts, I’m tempted to confront them and ask them simple questions like what our record transfer fee is, or the year in which Sir Alex took charge and see if they know the basic details of the club they claim to support. This might seem basic enough but having enough knowledge to have a valid football opinion takes years to obtain. It’s not an overnight process. I would imagine that bring raised in Manchester as a United fan means having an almost tacit knowledge and understanding of the club.  I only started following United in the early 21st century – for someone who has just turned 20 years of age and whose family has minimal interest in football, as well as the fact that I live overseas, I consider myself lucky to be as passionate and educated as I am. I understand that someone like me is still in the infancy stage of my journey as a United and football fan, but that journey never really ends. One can never stop learning about Manchester United.

The club itself does a great job in terms of communicating the values that it stands for, values that are reflected in prominent figures throughout United’s history, particularly Sir Matt and Sir Alex. Values that not only result in success, but deserved and justified success. Things are always done the right way. The United way. The loyalty that players like Scholes and Giggs have shown, as well as the sense of family that Sir Alex instigated within the club, reflect the principles and values of the club. Perhaps it is within these values that the true identity of Manchester United lies and maybe that is the best way to understand the club, no matter where you live.