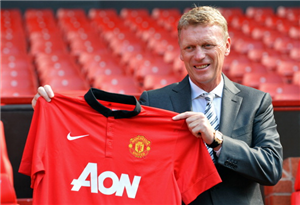 Often both managers and clubs alike are thrown under the bus for not signing the appropriate players to their respective squads – when in reality the transfer process is a unique beast full of twists and turns. For Manchester United, thankfully a club with rich history has established itself into becoming a football powerhouse and desired destination for many from young hopefuls such as Cristiano Ronaldo when he arrived from Sporting Lisbon, or seasoned veterans primed to make an immediate impact as Robin van Persie did ever so well this past season.

And every transfer window, everyone surrounding the Manchester United anxiously await the break of the next story, the next bit of news, and the next biggest signing. We’ve seen that Ronaldo’s reveal to the world he’s not signed a contract extension with Real Madrid which has sparked numerous debates whether or not he’d return to his beloved club where his heart seems to lie.

Or the continued Thiago rumors continue to circulate if he’s primed to leave the Camp Nou and join David Moyes for his maiden season at Old Trafford. We’ve got to take a step back – as journalists, writers, fans, and even those closer to the club such as managers and owners in order to allow sought after players like Thiago to gather his thoughts. Although it remains to be seen if Thiago would truly fit in with the reds, the additional pressure that’s been thrown on him at just 22-years-old cannot be healthy. Life decisions are tough and almost certainly it must be ringing through his head whether or not to make the move to the Premier League? More than likely, we’ll all welcome him with open arms but, until then it’s unfair to address him in any negative fashion.

Transfers take time. Much like a delicate flower grows ever-so slowly and requires loads of attention, so do potential signings. With plenty of convincing, crunching of numbers to meet salary demands, and promises from managers to the sought after player, are all aspects which factor into whether or not a transfer goes through or not. There’s plenty more that goes on behind the scenes that the common everyday fan is not entitled to see, and instead are left to the edge of their seats anxiously awaiting the official word.

Will Ronaldo return home, and will Thiago help shape United this upcoming season? All questions remain uncertain the moment, yet there is much more than meets the eye. As the transfer window becomes more and more of a world market, the rumor mill escalates to all-time highs and honestly, adds more confusion to deals than there needs to be. Should we get rid of the transfer window all together? It may make sense to regulate the monetary demands of players, or even the transfers in and out of specific counties; however, in the grand scheme of football these rumors seem to draw in a bigger crowd every year.

For the Manchester United fans – with the tight lipped David Moyes in charge, fully expect United’s new flower, blossom into a beautiful rose – as United looks to paint the city of Manchester red, once again.