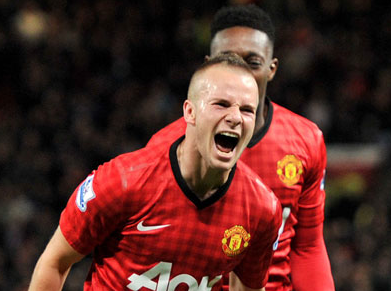 After coming off the bench to inspire a classic United revival in the 2011/12 Community Shield, Sir Alex Ferguson appeared to have unleashed England’s next big star; an heir to Paul Scholes’ thrown, some suggested.

Having returned from a successful loan spell at Wigan, Tom Cleverley had completed his apprenticeship and looked ready to establish himself in United’s first-team. Fast forward two years and the midfielder, like the rest of us, can’t be entirely sure how his future will pan out. The Yorkshireman was given his chance at the start of the 2011/12 campaign. Paul Scholes had retired at the end of the previous season, yet instead of delving into the transfer market for a replacement, Sir Alex once again put his trust in youth and promoted Cleverley to the first-team.

The Englishman’s performance in the Community Shield, together with a number of performances in the league [the 3-0 win against Spurs and the 8-2 victory over Arsenal to name but two], had United fans purring. Unfortunately, injury blighted his debut season. A foot injury suffered at Bolton in September was followed by an ankle injury upon his return six weeks later, sidelining the midfielder for a further four months.

*The emergence of Tom Cleverley was inevitably going to result in comparisons with Paul Scholes; what with the youngster making his debut so shortly after the legend’s [first] retirement. Comparing the best midfielder of his generation with a player 14 years his junior and still learning his trade, however, is a tad unfair.

The start of last season brought renewed optimism to United fans. TC23 had established a good partnership with Michael Carrick at the heart of United’s midfield, and started alongside the Geordie in the majority of the so called ‘big games’. Roy Hodgson also took a liking to the United youngster, selecting him for every international game during the course of the season. Despite impressing in his early season performances, the United graduate featured in just three of the Reds’ last 10 Premier League games. Did the former boss [saying that feels weird] lose faith?

United’s No. 23 possesses all of the attributes a successful modern-day central midfielder requires: he recycles the ball well, retains possession under pressure, and brings tremendous energy to the side – qualities that are somewhat underrated by so many Premier League viewers. If there’s one thing Cleverley could, and perhaps must, improve on, however, it’s his goalscoring. Playing in a deeper role alongside Carrick obviously plays its part, but doesn’t necessarily prevent him from getting into goalscoring positions. His link-up play in the final third is excellent; he just needs to learn to pull the trigger when presented with goalscoring opportunities.

Cleverley notched just two goals in 22 appearances last season, and while that isn’t so bad when you consider the fact that he only completed a full 90 minutes in 23% of the 22 league games he played in, adding goals to his repertoire would only enhance his overall game, and give United another dimension in the process.

Whether Moyes sees Cleverley as a regular starter remains to be seen. While he’ll undoubtedly be given a chance to cement a place in the starting XI, the England international must ensure he does everything he can to try to emulate his early season form of the last two seasons, especially if midfield re-enforcements are to arrive, as expected.

As the 2013/14 season draws ever closer, Tom will be preparing himself for what will be the most important season of his career to date. It’s paramount that he gets his head down and fights for a place in the starting XI, regardless of whether Moyes strengthens his midfield options or not.

6 responses to ““The next Paul Scholes” they said”