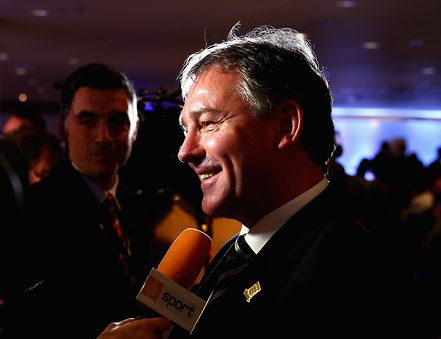 Bryan Robson believes Manchester United have a reliable midfield and do not necessarily need to sign a central midfielder this summer.

SN asked fans what position should Moyes focus on most, yesterday on Facebook. All voters selected midfielder, so that gives another clear indication that players, even legends like Robson, don’t speak for the fans.

There remains a cloud over the future of Darren Fletcher with the Scot battling ulcerative colitis. A third surgery last week meant the 29-year-old will now begin rehabilitation.

Every summer the club is linked with numerous central midfielders and it does seem to be an area David Moyes intends on strengthening. However Robson believes the likes of Anderson, Michael Carrick and Tom Cleverley are all capable of starting in midfield.

“I know with the Manchester United fans, they are used to having a really dominant central midfield player, Like Keaney, Incey, myself and then Scholesy,” he said.

“But I think what the fans have got to look at is: Is the balance of the squad pretty good anyway without having that type of player in? You’ve got to say ‘yes’ as we won the title by 11 points.

“Now, of course you always want to improve but you’ve got to look at the balance of Antonio Valencia, Ashley Young, Tom Cleverley, Michael Carrick, Ando [Anderson] and the rest.

“They are still very, very good players but you’ve got to look at the balance and is that right, rather than go out and try to get an individual who you must rely on all the time.”

“So my message to Manchester United fans is don’t be too influenced by this talk that we need this midfield player because I think the boys can cope.”

Cannot say I agree with Robson. When you look at our current squad, we’re strong at the back and up front. United are one or two midfield signings away from being a real solid unite. Yes, we won the league by 11 points but it’s not going to be as easy as that next season.