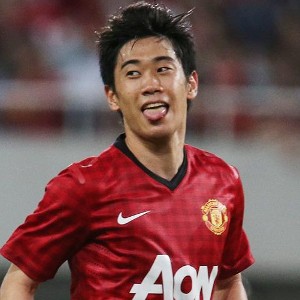 Shinji Kawaga may not have seen as much time as he’d like in his freshman season with Manchester United, but as a modern professional that he is – he remains positive. The 24-year-old won his third consecutive domestic league title (previous two with Borussia Dortmund) and noted to Sports Illustrated “I wasn’t satisfied with my overall performance but I played well in the second half of the season and started to get more and more confidence.” Despite being dissatisfied with his overall performances he did create a few brilliant memories during his first season with United, in particular his hat trick against Norwich City subsequently placing the reds 15-points clear atop the Premier League.

What separates Kagawa from many other professionals during this day in age, is the fact he’s committed to his own individual development as a player, but also concerns himself with team matters. Being thrown into the mix on numerous occasions at various unnatural positions to him, the 24-year-old took the additional minutes Sir Alex threw his way and made the most of them.

We’ve heard Sir Alex praise Kagawa to the stars and back according to ESPN FC, “He is gradually getting his form back but next year he will be far better. You will see a really good player then.” The intelligent passer of the ball brings a calming sense to the reds attack next season with the absence of Paul Scholes in the middle of the park. Kagawa’s ability to orchestrate and lead the attack adds another dimension to David Moyes’ system with the already established Robin van Persie, Danny Welbeck, and Chicharito fighting for the top spots.

A model professional is a player whom goes above and beyond the call of duty, and if that means sitting on the bench while others preform, Kagawa would do the best to support Manchester United. Certainly, this off-season he’s going to need to bulk up to uphold a grueling Premier League schedule ahead but, with his hard work mentality and his strong will there is no question the Japanese international is one hundred percent committed to the men in red.

Shinji Kagawa was forced to play the left wing in the 2012/13 season – and I’d expect Moyes to employ the makeshift midfielder/striker to perform well wherever needed. Focusing on the task at hand, expect his sophomore season to far expand upon this past season as the willingness to better his play and create for United, is uncanny.

Is a conflict with Wayne Rooney on the horizon, again? Whether or not Rooney remains with Manchester United is yet to be seen – if Kagawa begins to perform brilliantly, Moyes may be forced to move Rooney around, or sit him on the bench. As his former manager Jurgen Klopp believed the midfielder features most prominently in the middle of the park, Kagawa may out-perform the Englishman just as Robin van Persie did this past season in the striking slot.

After only one season with Manchester United, Shinji Kagawa is a true red. The young midfielder’s best playing days are ahead of him, and his admiration for players like Robin van Persie, and Rooney provides a stepping stone for Kagawa to hopefully attain. And at the end of the day, Kagawa knows how success is attainable as he told MUTV “It’s important to think positively and keep trying hard, imagining you are successful, even when things are tough.”

We’re in for another high-flying, earth shattering, and goals galore season with Manchester United – and the possibility of retaining the 21st Premier League crown in the clubs history, grows in our minds daily. Luckily for us, Shinji Kagawa is on our side.

One response to “Kagawa – Hard work, pays off”