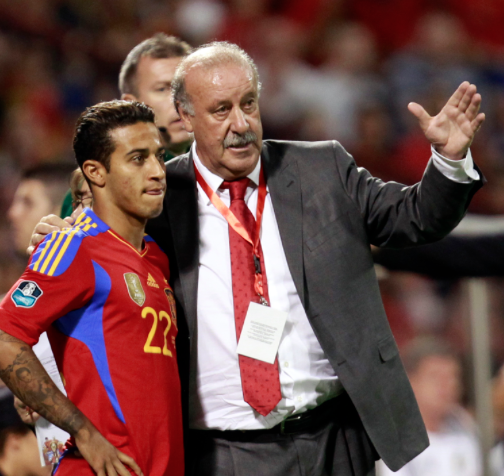 Vicente del Bosque understands Thiago Alcantara needs more first-team action if he is to cement a place in his squad for the 2014 World Cup finals, but does not believe he should quit Barcelona.

Thiago, just 22-years-old, was the star of the recent European Under-21 Championships where he scored a hat-trick in the final against Italy.

The Barcelona midfielder’s future has been well speculated this summer and there’s little doubt that Thiago is Manchester United’s main target. His released clause would allow him leave for as little as £17million before tax until August 1.

United have been tipped as the most likely destination, but the club are still wary of Pep Guardiola and Bayern Munich’s presence in the market. This week will apparently say a lot with Thiago meeting with Barcelona’s representatives to discuss the matter.

Del Bosque, an admirer of Thiago, is not convinced a move to Old Trafford would benefit the player. The Spanish boss would clearly prefer to see the player stay at Barcelona.

“The most important thing for Thiago is that he keeps on getting games,” he said. “I think he would get them at Barcelona, he is held in a very high regard at the club.”

22 responses to “Del Bosque: United not the best move for Thiago”