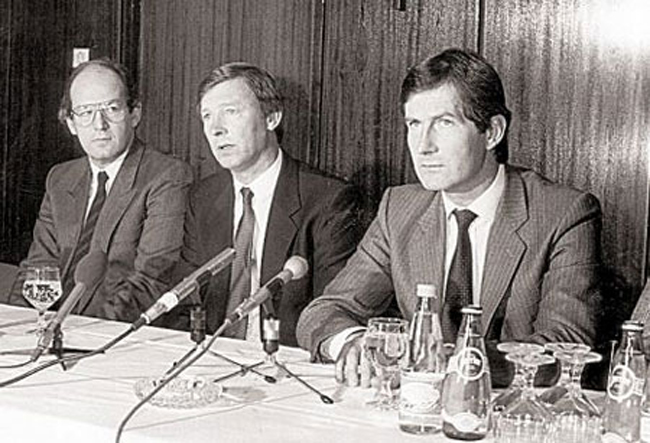 It’s November 1986. Fittingly Nick Berry is on top of the charts with ‘Every loser wins’, Margaret Thatcher is well into her second term of office and Jerry Bruckheimer’s ‘Top Gun’ had just been released. However Manchester United were far from being ‘Top Gun’ and had been for a while now, that elusive league title still eclipsed them, McGuinness, O’Farrell, the Doc, Sexton and even Big Ron had failed in the quest for the holy grail, whilst our foes down the East Lancs Road were sweeping everything before them, Manchester United had spent one year in the wilderness of the second division and effectively had become a cup team. A young gritty and determined Scot was appointed to solve the mystery of how the world’s biggest football club had gone this long without winning their own domestic league title. ‘The young gritty and determined Scot’ is about the only similarity of Sir Alex and David Moyes’ appointments, which is why this is a step into the unknown for our great club. The Manchester United of July 2013 is a different beast to that of November 1986. Sir Alex was brought into to end the drought of league titles, whereas Moyes has been brought into preserve this, and keep us on our perch.

If we cast our minds back to the first week of November 1986, United had just been held at home to Coventry City in front of a crowd of 36,946: with Peter Davenport scoring for the reds, leaving them in 19th place in the first division table. Early on in to what would turn out to be the 20th season without a league title, this was not good enough for England’s greatest football club. Despite going 6 games unbeaten this was the final straw for Atkinson, who was dismissed on Bonfire night, appropriate due to his successor’s early handling of the dressing room.

The circumstances of Sir Alex and Moyes’ appointments couldn’t contrast each other anymore than they already do, which is why comparisons seen in the media are effectively irrelevant regarding the composition of the squad and the nature of the football club. Ferguson inherited a sleeping giant of a club whose structure did not adhere to its proud past, and like many other clubs at the time had a heavy drinking culture – and not to mention failed to be the “Top Gun” of England.  Moyes inherits a squad of champions, a club whose never say die attitude has been engrained into its DNA over the past 26 years. Backroom staff may have been altered, some players may leave, but that desire to continue the success is still burning in the core members of the squad, just ask Robin van Persie, Rio Ferdinand, Michael Carrick or Giggsy what their aim is for Moyes debut season – to keep those red ribbons around our trophy.

There has been a general consensus of acceptance since the news of Tuesday 9th May 2013. A ‘where were you when you heard the news?’ moment, initially greeted by shock and the fear for many reds of entering the unknown, life after Ferguson. Despite there always being an inevitability that the day would come, there will be a strange feeling when peering to the dugout without Fergie, particularly for reds my age, which every minute they have ever watched of United was under Sir Alex. We won’t see the ‘Fergie Jig’ when we score last minute winners, reminiscent of seeing your Grandad celebrating a goal.  But this feeling of fear and shock should be one of excitement, we’re about to embark on another emotional roller-coaster, there will be ups, there will be downs, but we’ll all enjoy the ride. The last minute goals will remain, because we are Manchester United, and nobody does it better than us.

Despite the change at the top, and despite losing Mike Phelan’s short shorts, there remains a consistent fabric of personnel with the winning mentality that has been instilled in them over the past 26 years. The appointments of Ryan Giggs and Phil Neville to the coaching staff ensure this continuity of the great story that is Manchester United, so come on David Moyes, play like Fergie’s boys, and take a look at the Stretford End when you do, we will be going wild, wild, wild.

One response to “A step into the unknown”