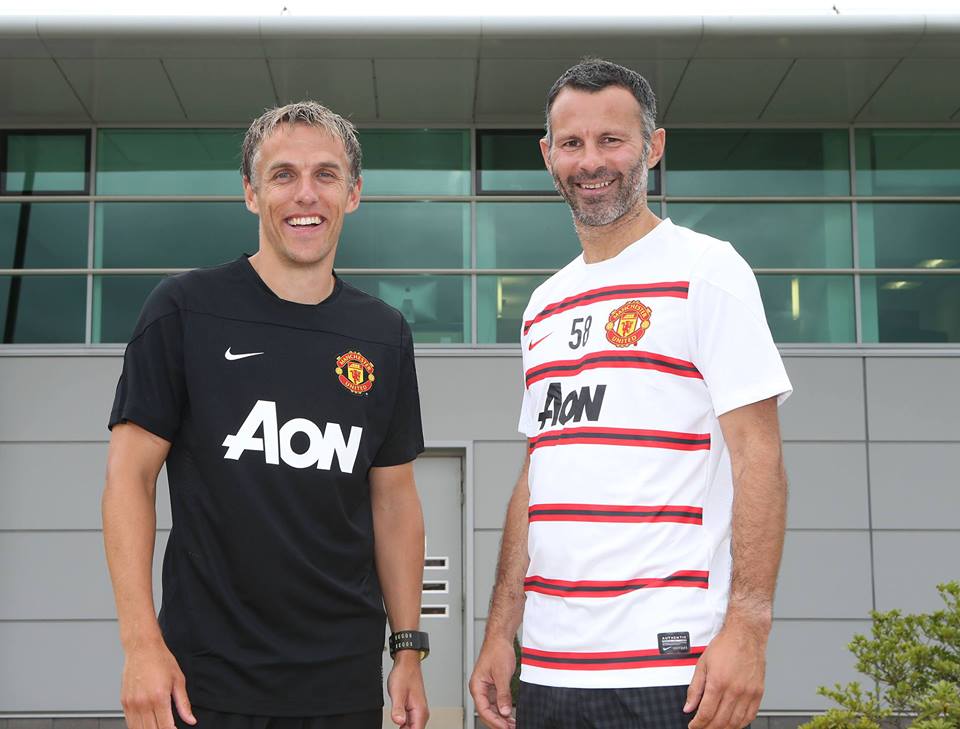 David Moyes’ overhaul of staff continued on it’s merry ways on Thursday, with the club announcing that club legend and unrelenting servant Ryan Giggs had agreed to take up a player-coach role. This coincided with the news that recently retired Phil Neville had also agreed to become part of Moyes’ new-look setup.

Both men will take an active role in overseeing the title-winning squad that Moyes inherited from Sir Alex Ferguson. The newly appointed duo have been showered with almost universal praise gauging by our reaction this morning, it is not hard to see why either.

Both Neville and Giggs can boast CVs and medal collections that few get to experience over their careers. Both players enjoyed, and in Giggs’ case still enjoying, illustrious careers- with Neville reviving his career under Moyes at Everton when he was stalling at United and needed regular action.

Both players have charisma and resilience, you need these traits to ensure longevity in the game. Perhaps more telling than that is both their leadership qualities: both have donned the armband of United, and Neville went on to prosper leading Everton. This means that they would get the respect they deserve on the training pitch. It’s not just their ability to lead a group of players that is a redeeming quality, they were the consummate professionals when it came to their attitude towards training and the like. The current crop of players would get a kick from seeing both of them around the AON Training Complex and would hopefully aspire to replicate their playing feats.

Neville and Giggs both graduated from the illustrious set of talented individuals well known as Eric Harrison’s Class of ’92. That select group were an unprecedented bunch, not only in terms of how many gems made the grade at the same time, but also with the success that they all eventually achieved.

Whoever is fortunate enough to receive the Manchester United education, whether it be schoolboys, teenagers or first-teamers, is brought up with distinct lessons. The Class of 92 batch were hugely successful over a period of time, mainly thanks to the United ethos, the traditions, the DNA and the winning mentality being inherently stored in their systems. Neville and Giggs played roles in United achieving the unforgettable treble in ’99, they know how to get over the line and go the whole hog. Their experiences will be crucial to no end and the players can confide in two staff members with that ingrained winning mentality.

In short, despite David Moyes looking to create his own legacy and stamp his authority, he has done well to mix in people with history with United and his trusted trio of Round, Lumsden and Woods.

With the arrivals of Neville and Giggs, he is ensuring that continuity with the United way is guaranteed, something which is of paramount importance and primary ingredient for stability on and off the pitch following Sir Alex’s retirement.

With Wayne Rooney’s future clear as mud currently, there may be a subtle, left-field undertone to the appointments of Neville and Giggs. Both players have loyalty etched under their skin, both enjoyed long spells at the clubs they were at, so perhaps Moyes has called on two trusted men to speak some truths to a muddled Rooney. Players turn up and listen to Ryan Giggs, the ultimate professional and current Mr. Manchester United.

“I played with Wayne Rooney for many, many years,” Neville told talkSPORT. “He’s a fantastic football player. I’ve seen David Beckham, and other big players, leave Manchester United and it really is something that comes down to the individual and the club.

“Personally, with my allegiances, I would never recommend anyone leave Manchester United because I believe it to be a great stage to play football and you can achieve what you want there.”

Neville said on Sky Sports that Rooney could do a lot worse than look at Ryan Giggs as an example of how to conduct oneself and see the success he has achieved even into his late thirties. Despite the temptations of pastures new, Giggs knuckled down and became a club legend. Rooney has the chance to etch himself in a similar light.

All in all, David Moyes has set his stall out the right way with these two acquisitions, the fans would love it if Paul Scholes was to follow suit and continue the United core in his backroom employees.

With the backroom staff taking shape nicely, Moyes can now turn his attention to transfer targets, ending the Thiago saga and adding depth and more quality to the title-winning squad.