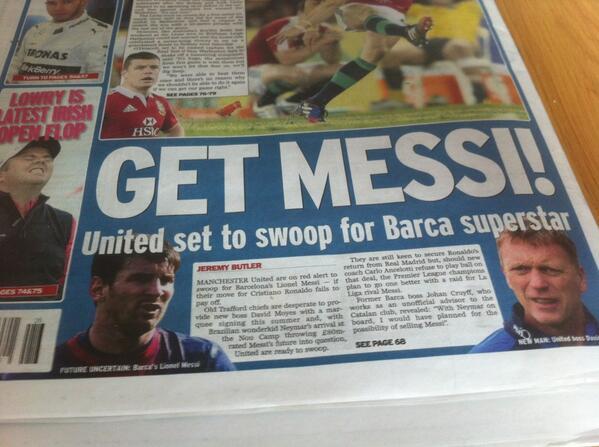 No, it’s not a joke. The back page of Sunday Life featured a piece claiming “Manchester United are on red alert to swoop for Barcelona’s Lionel Messi – if their move for Cristiano Ronaldo fails to pay off.” Football journalist Jeremy Butler wrote the piece and has picked up some attention for doing so.

If you are unfamiliar with the newspaper, Sunday Life is the Sunday version of the Belfast Telegraph and has been published since October 23, 1988.

The picture did the rounds on both Twitter and Facebook, but I am yet to see someone stupid enough to see it as a realistic possibility. Butler seems to have based his story on Barcelona’s capture of Neymar, putting “Messi’s future into question and United are ready to swoop.”

Messi is 26-years-old. I mean, what an age to be the best player in the world. Plus, the arrival of Neymar changes nothing as far as the Argentine is concerned. If Barcelona are putting up a fight to keep Thiago Alcantara, a player on the squad’s fridges, I cannot imagine what they would be like if their best player was to leave.

The third paragraph says United remain eager to bring back Cristiano Ronaldo, before they add Johan Cruyff’s bizarre quotes from last week that said he would consider selling Messi now Neymar has arrived.

Anyway, we all know Messi would struggle on a cold night at the Britannia Stadium. Ahem…