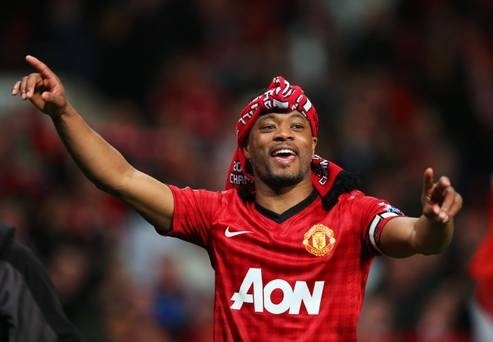 With incoming manager David Moyes seeking to reconvene with Everton’s prized asset at left-back Leighton Baines, fresh seeds of doubt have been spread over the future of our current number 3, Patrice Evra.

Rumours are emanating by the day that United are looking to up the stakes in their pursuit of Baines, with increased bids appearing imminent. As a consequence, Evra is now being linked with a return to his homeland with AS Monaco, from whom he joined in 2006 for a miserly £5.5M.

Evra’s was thrust into the deep end as far as introductions to the English game were concerned, there was no easing into Old Trafford life as the baptism of fire started with a less than ideal half-time subbing at the Etihad. Trevor Sinclair of all people had Evra on toast, who must have been in a state of flux with all the hullabaloo and mayhem happening around him.

In his first interview, he was asked how he was settling into Manchester life, his response was brutally honest- something that has set Evra apart from some of his team-mates, “I have not got accustomed to English life. The food is truly disastrous and it rains all the time”.

So, as we can well remember, life was initially not beer and skittles, or in Evra’s case not baguettes and coffee. The Costa Del Salford bad weather has been a regular grumble from kettle neck Tevez and Nemanja’s missus no less, but one redeeming facet of the Frenchman has been his sticking power and resistance to adverse situations.

Whether it be the incipient homesickness, death of loved ones or getting vilified for being the innocent victim of racial abuse, Evra has come out of it all on the right side and as such was the ideal understudy with the armband in Nemanja Vidic’s prolonged absence.

What fans expect as a bare minimum from the eleven on the pitch is their readiness to give nothing other than the 100% expected. The familiar axiom goes, ‘Play for the badge on the front, and fans will remember the name on the back’. This goes a long way to explaining why Patrice Evra is loved by so many United followers. He is so impassioned by Manchester United, he always gives his all on the pitch to give the fans what they want, he always wore his heart on his sleeve for the cause, and that trait warms you to the fans more often than not. Evra is certainly the outgoing, extrovert type, but that has helped him show off his love for United.

Just look at the way Evra and the fans as a collective celebrated our 2-1 victory over Liverpool the season before last. Did Evra cross the line? Probably, but who could begrudge him or us those precious moments to savour a victory that was for him? The raw emotion that came out, the fist pumps, the rallying of the crowd, the jubilant lap of honour around every corner, milking it right in front of the guilty party in front of the adoring Stretford End. That was a priceless moment which ensured that the Frenchman was endeared to us for a long time.

Evra could be interpreted as somewhat of an unlikely leader, but right from the outset he nailed the United ethics and beliefs to his chest and set about replacing the popular ghost of Gabriel Heinze (before professing he wanted to jump ship to the Kopites). Whenever you hear Evra’s golden press interviews, one cannot help but pinpoint how much of a telling influence Sir Alex Ferguson has on him. Evra admitted that the transition from French to English cultures was eased by the Scot ably communicating to him in his native tongue. The Frenchman has never been shy of lauding Ferguson, once claiming ‘he will die in the manager’s chair, it’s his destiny, he will never stop’.

Evra’s best years are arguably down old Memory Lane, he was stunning as soon as he found his feet, particularly between 2008-10. He has always been sniffing around the Premier League Team of the Year for numerous years, often considered the benchmark and stalwart at left-back alongside Ashley Cole. Ironically, it is United target Baines who now has that lofty mantle.

Evra has been a diamond bloke, loyal servant and terrific defender but if it is the end of an era and time for the Frenchman to move on, no-one from our side will have a bad word to say about his contributions over the past 7 years. Yes, he did become a bit of a liability at times recently, but if United had not uncovered such a gem in Denis Irwin from Oldham in 1991 for a meagre £500,000, Evra could well be classed as Ferguson’s best ever left-back.

Now, we all know Patrice could well make a living in after-dinner speaking or stand-up comedy given some of his legendary interviews, so I’ll leave you with some unforgettable words from the legend himself. Merci beaucoup, Patrice!

Evra on City- “We have always been Manchester’s first club. The fact that they won the title last season changes nothing”.

Evra on Van Persie- “He hasn’t made the wrong choice. It was a long time that he didn’t win the league [at Arsenal]. He has come to Manchester United and won it”.

Evra on Ji-Sung Park- “It was a great cross from my best friend Ji-Sung, I’ve been waiting a long time for this (goal vs Wigan) so maybe I’ll buy him a car for Christmas!”

Evra on United- “United is a completely different world, they take care of the tiniest detail for you. To be honest, I’ll be the king of all c**ts if I can’t be a success under such conditions.”

Evra on Arsenal- “For me Arsenal is a football training centre. You watch the match, you enjoy it, but are you going to win a title afterwards?”

2 responses to “Patrice Evra – The legend”