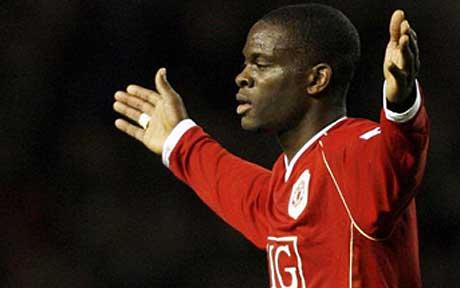 Manchester United already had Ruud van Nistelrooy to hold down the goal-scoring job, who was this Frenchman joining in 2003? After helping Fulham gain promotion to the Premier League, Louis Saha immediately popped on Sir Alex Ferguson’s radar for this brute strength, goal scoring ability, and the immediate impact he’d have at Old Trafford. Now at 34, Saha has enjoyed a solid footballing career as he’s come from the lesser known ranks of the French First Division to Newcastle United and Fulham, then of course – The Theatre of Dreams.

Upon signing the Frenchman midway through the 2003/04 campaign for around 12 million pounds, Saha and Manchester United seemed a match made in heaven. However, despite the impact he made up front for the Red Devils, unfortunately injuries plagued his career and to this day continue to do so as he currently plays for Italian side, Lazio. Nevertheless, barring any injuries Saha contained the potential to become one of the greatest to ever grace Old Trafford simply of his eye for goal. Yet, football is a harsh world where sometimes the most promising of players see their careers stunted by unsuspected circumstances.

During his four and a half years with  United before moving to Goodison Park, Reds kissed the ground he walked on. The young Frenchman captivated Premier League crowds with his logic-defying goals from nearly impossible angles to his sheer will to win every ball. Even Rio Ferdinand and Wayne Rooney whom both had the luxury of playing alongside Saha, noted that he was the best striker they’ve ever played with and played against – a true testament to Saha’s work ethic and ability as a frontman. In his opening campaign for United, he tallied seven goals in only 10 starts even scoring his his first two matches against Southampton and Everton. As he continued to gain steam in the United ranks, Saha received his first international call up but, his following season with United proved devastated with injury.

In 2004/05 Saha was marred with numerous knee injuries which set him back around four months and on his return, it was almost as if he’d never been absent. A pivotal presence in United’s League Cup run, he was even chosen over the Dutchman in the final against Wigan Athletic – which he netted a goal in. As time progressed, Saha seemed to take on United’s preferred striker role and seemingly at the right time as Ruud van Nistelrooy left for Real Madrid.

The 2006/07 season, shortly after signing a contract extension he suffered groin and hamstring injuries which once again, adding to yet another set back. If he managed to stay fit in the 06/07 season he could have easily scored 30+ goals, and beaten out Drogba for the Golden Boot. In many ways I’d like to think Drogba and Saha were very similar during their prime football years as both had the passion to drive forward, and could knock just about any defender off the ball. In terms of attacking menace, I’d give the advantage to Saha because his game was a bit more complete simply because of his pace – and his ability on numerous occasions to dart behind defenses and take on goalkeepers. Sure, Saha may not have the best ball control but he was blessed with comparable strength to Drogba’s which allowed both to thrive in the Premier League.

120 appearances and 42 goals is an admirable stat taking into consideration his numerous injuries. It’s fair to say the Frenchman was one of United’s most lethal strikers in terms of goal output. The midfield of Gary Neville, Paul Scholes, Ryan Giggs and even Wayne Rooney up top fed Saha like a mad-dog who could tear oppositions defenses apart what seemed to be at will. Although he’s since moved on to shorter stints with Everton, Tottenham and Sunderland, I believe his best years were with Manchester United. How many times did we hear “Saha gets behind the defense” – Numerous times. A true poacher who was a benefactor of United’s steam-rolling midfield, found plenty of time and space on the ball allowing him to unleash thunderous strikers from distance and plenty of openings in the eighteen yard box.

The left-footed genius bagged goals from impossibly angles seemed to constantly send his defenders in the wrong direction as he made near post runs with a purpose. Deft touches, brilliant turns, and a two-footed finisher brought lightening pace to the United attack making it very difficult for defenses to keep up with him (when he was healthy). Louis Saha was a blessed talent to play for Manchester United, and we can only hope he enjoyed his time at Old Trafford as much as the fans enjoyed his brilliant full-steam-ahead mentality.