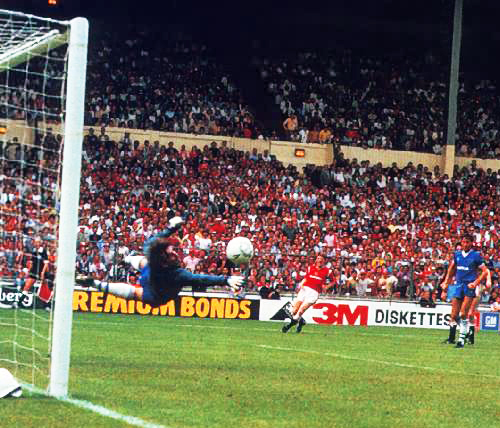 A few months ago I discovered @UtdBeforeFergie on Twitter, sharing memories from the good old days. The account has the backing of not only fans but club legends also, making it a worthwhile follow for Manchester United fans that soak themselves in the club’s history.

If you have any memories of United from the 80s, 70s or before, this account will retweet and hopefully build you a connection with likeminded Reds. It might not be everyone’s cup of tea but those that contribute on a regular basis seem to get a buzz from it.

You started the account during the 2012/13 season, yet talk very little about the current team. What was the initial reason to set it up and were you surprised with how quickly it took off? – @UtdBeforeFergie had 5,370 followers when this interview was first published.

Having been on Twitter for a couple of years with my personal account, I was disappointed to find that there wasn’t really anywhere to talk about the years before Sir Alex as the majority of United pages focussed on the current team. So I decied to set up a page that could serve as a ‘meeting’ point for us ‘older’ Reds to reminisce, share experiences and swap stories. When I set it up, I really wasn’t sure what the response would be, clearly it stuck a chord with fans as follower numbers just took off. No way did I expect the kind of response that it has had, its been amazing.

Several legends have worked closely with you in recent months. Norman Whiteside went as far as promoting the account with a picture saying “we love @UtdBeforeFergie.” I guess this gives you the drive to do more?

Never, in a million years, did I expect someone like Norman Whiteside, a player that I loved as a kid, to go as far as that. It made it all worthwhile. Ex-players like the late, great Brian Greenhoff really embraced the idea and regularly promoted the page. I feel honoured that those players have given it their ‘seal of approval’. Absolutely it drives me to do more.

Your favourite memory before Sir Alex Ferguson’s appointment in 1986?

Although I wasn’t their in person, the 83 FA Cup final replay v Brighton and Norman Whiteside’s sublime winner in the 85 Cup final stand out amongst others (Jimmy Greenhoff’s header in the 79 semi final replay, Robbo v Barca in 84). The 77 Final is my earliest memory though.

As it was my earliest memory as mentioned above, it would have to be the 77 FA Cup final.

Tough call, it’s a toss up between the heartbreak of the 79 FA Cup Final or the 6-0 loss to Ipswich (even though Bailey did save 3 penalties).

Your take on the Glazers?

I hate the fact that they put the club into so much debt and that they seem to treat it as a business rather than a football club. A part of me died when Football Club was taken off the crest.

What blogs/fanzines do you enjoy most?

Stretty News of course. I used to enjoy RedCafe but haven’t been on it for ages.

Name one opposing player down the years that you would have loved to see at United?

I think Lineker would have been a fantastic signing for us.

There are so many contenders for that title but for what he gave to the club, his commitment, his passion and his sheer tenacity, it would have to be Bryan Robson. Had he been injury free, there is no doubt that he would have been talked aboit in the same light as the worlds greatest midfielders like Zidane.

You don’t make this easy do you? Bailey, Albiston, Buchan, McGrath, Nicholl, Hill, Robson, Whiteside, Coppell, Hughes and Stapleton. I could also include Moran, Muhren, Wilkins, both Greenhoffs and Pearson.