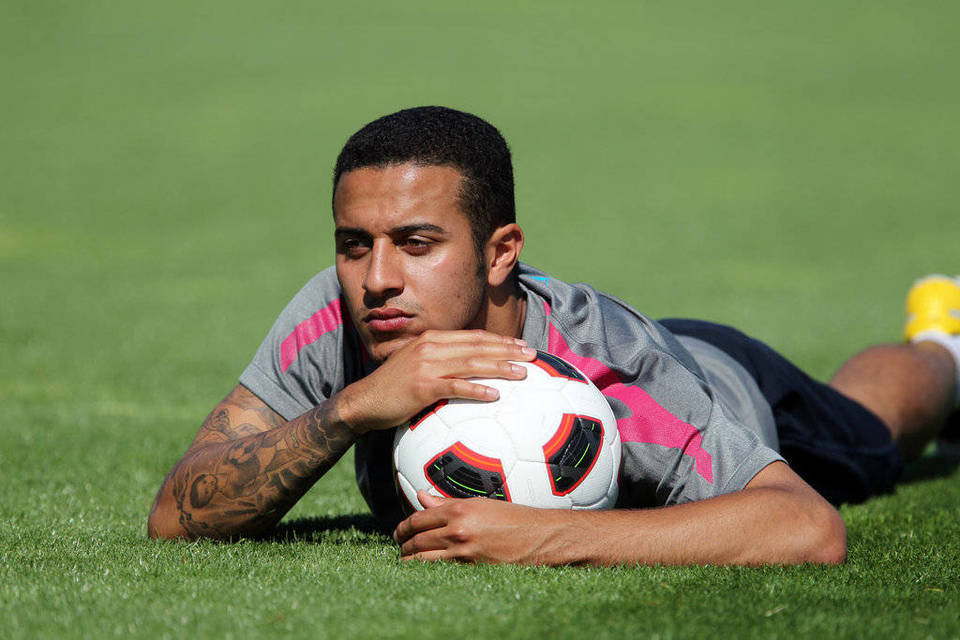 Belief comes in many guises. But the true measure of real belief is what you are prepared to put on the line to support your belief. The case of Thiago Alcantara potentially moving from Barcelona to support his case for a World Cup place next year in the Spanish National team is an intriguing one as he is prepared to leaving the best football-playing team in the world right now to get what he needs – more playing time.

Over the last few days there have been a few obstacles placed to potentially block a transfer to Manchester United. What we are going to analyse in this article is the reasoning behind this move and the likelihood of it.

Manchester United fans have watched the central midfield position for Manchester United with angst over the last few seasons as no major central midfield signing has been brought in. Despite the loss of Possebon, Hargreaves, Gibson, Fletcher, Pogba, and Scholes United have been relying on Carrick (who has been magnificent), Anderson (injury-prone), Cleverley (injury-prone), Scholes (aging), and Giggs. Sir Alex Ferguson did sign Kagawa last year but his best position seems to be just behind the two strikers, and Powell who is still young.

Thiago Alcantara is a player that Manchester United desperately need right now. A young central technical midfield player who can dribble past a player, score from distance, play one-touch passing and who is also a visionary passer who can dictate the tempo of a game. He has demonstrated all of these qualities in the European Under 21 Championships where he was considered the best player of the tournament. Manchester United players remember 2 years ago he scored a wonder goal in the United States against David de Gea and haven’t forgotten him since. As the story goes United tried to sign him 2 seasons ago but were informed that he didn’t want to leave at that time, he understandably wanted to break into the Barcelona team.

Sir Alex Ferguson has been looking out for the right person for this position for a while and was reluctant to make a signing for the sake of making a signing. Here’s Ferguson’s dilemma from 2011 in terms of searching for a replacement for Paul Scholes:

“Only Xavi and Iniesta are comparable to Scholes.”

It should be said that Anderson was originally bought to replace Scholes and while it is undoubted that he had the natural talent, what he lacked was a free run in terms of injuries.

Manchester United themselves have lost talented youngsters who weren’t playing. Ignoring the loss of the prodigiously talented Ravel Morrison who United let leave as he wasn’t putting in the hard yards, in the last 5 years they have lost two other talented youngsters. Last season they lost Paul Pogba who was mainly playing in the reserves of Manchester United without getting playing time in the first team. He wound down his contract and secured a move to Juventus where he has become an instant hit in their title winning first team.

Also in the case of Gerard Pique was a youngster at United (who originally nabbed him from Barcelona youth team) who hadn’t looked at the ages of United’s most first-choice defenders. It was clear early on that with Vidic and Ferdinand Pique was likely to be a regular fixture in the first team of United until his late 20s. So Sir Alex Ferguson let him move back to Barcelona for a knockdown fee.

When Barcelona re-signed Fabregas in 2011 United tried to make contact through Thiago’s family because they felt this would limit Thiago’s game time. They were proved right.  Before Fabregas arrived back in 2010-11 Thiago started 6 games. After Fabregas arrived back at the Nou Camp in the 2011-12 season Thiago started 25 games. However, despite the fact that Thiago could have left Barcelona for only 18m Euros and despite the fact that Barcelona won La Liga by a whopping 14 points Thiago’s appearances plummeted to a mere 16 starts last season.  Hence the reason for a move. Trying to overthrow Xavi, Iniesta, Fabregas, Busquets is always going to be a tall order – especially with sports science now extending players’ careers. And now Barcelona have signed Neymar – who could be a winger, but could also be a kind of twin number 10 with Messi – this is likely to further limit Thiago’s options when Thiago is desperate to play in the World Cup in Brazil next year.

Over the last few days there have been a lot of theories floated around with scenarios that would block his move to Manchester United so it is worth taking a closer look at those right here.

There were rumours that Thiago would join up with his previous manager Pep Guardiola at Bayern Munich. While this option is possibly true, when you take a closer look Bayern Munich have just won the Champions League with a Central Midfield of Muller, Kroos, Schweinsteiger, Javi Martinez, Shaqiri (who can play in central midfield 3), and they have just signed Gotze at 35 million Euros. This move doesn’t make a lot of sense and certainly doesn’t place Thiago in a more powerful position than he is currently in at Barcelona if his aim is to win a place in next year’s Spanish World Cup squad.

On Friday there were rumours surfacing that Barcelona would desperately try to keep him. While certain players have tried to dissuade him (Xavi and Iniesta among them) and it is undoubtedly true that Barcelona would try, really actions speak louder than words. Knowing his contractual situation, and despite the fact that they won the league by 14 points Thiago still only started a paltry 15 games last season.

There were rumours that Barcelona would only be prepared to loan him out but this wouldn’t make sense to United when the buyout clause is only 18m Euros. From a business perspective his immediate sell-on clause would be 25m – 35 million Euros. Also to Thiago a loan would still see him being considered fourth choice midfielder to the Barcelona players (and further down when considering Martinez, Cazorla, & Mata in the Spanish squad). Much better for him to commit to a permanent move and add more dimensions to his game in another culture in order to bring something slightly different back to the Spanish team.

It should be said that watching Thiago’s interviews at the Under 21 Championships that he comes across as a man with his head screwed on. Although his English is limited, he gave interviews confidently in English, there was no indication of immaturity, or an ego, and you sense in his play that he always puts the team first. He was captain of the Spanish Under 21 team and all of these qualities are qualities that Manchester united look for when playing in a player in the spine of the team (goalkeeper, centre backs, central midfield, strikers).

Thiago’s father is Mazinho the Brazilian International one gets the impression that every move they make is carefully considered and has a long-term objective in mind. It should not go unnoticed that Barcelona and Manchester United both have a similar ethos in terms of developing young players with a long-term objective and in terms of the team’s stability. Real Madrid was immediately ruled out, and Chelsea and Manchester City probably wouldn’t be considered. In many ways he is what United fans and staff would call “A Manchester United Player”. It has been reported that Mazinho has already met David Moyes at United and that Moyes has stated that he wants Alcantara to fulfil at United the position that Arteta did at Everton for him.

Thiago would have seen David de Gea leave Atletico Madrid with the unenviable task of uprooting Iker Casillas, Victor Valdes, and Pepe Reina. By being voted as the Premiership Goalkeeper of the year (over Pepe Reina) David de Gea has a chance of doing just that and making the Spanish National team next year perhaps as first choice goalkeeper. Thiago will be hoping that he has the same impact on the Premiership. By becoming a hero in another country this certainly changes the perception for whether you should get a place in the squad or not.

Sir Alex Ferguson would have known that Thiago’s first question when considering this move would have been to Gerard Pique about what it was like at Manchester Untied. Pique learned his lesson and would have told Thiago that it’s a great club but to ensure that there aren’t older players established in his particular position who are likely to remain world’s best for quite a few years when you move. With this in mind the Thiago Alcantara transfer has been two years in the making. Ferguson deliberately demonstrated United’s commitment by keeping that position open. Now it is down to Thiago to demonstrate his sheer belief in himself to become a hero at Manchester United rather than an also-ran at Barcelona.

3 responses to “Sheer Belief – The curious case of Thiago Alcantara”