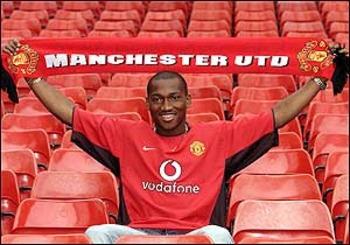 Brought in to replace Roy Keane? I’m beginning to think trying to replace Keano has become more of a curse to players than good. Eric Djemba-Djemba was brought to Manchester United in 2003 because he offered plenty of promise. A deep lying midfielder was admired by Sir Alex Ferguson because of his hard tackling, and relentless work ethic in the center of the park; however, once again Fergie was left disappointed by the lack of success by another one of his potential “replacements.”

Currently 32, Djemba-Djemba plays for Israeli side Bnei Sakhnin and has certainly seen a dip in competition from paying with United during his heyday to featuring for Aston Villa, and now what could be his last stop in Israel. The Cameroonian midfielder only featured in the United ranks from 2003-2005, and may have taken more footballing knowledge away from the experience rather than imprinting his mark at Old Trafford.

In his two prior season with Nantes, Sir Alex Ferguson seemed largely impressed with his tackling. As Keane was hitting the latter stages of his career, it was time to search for a shoe-in who could handle the pressures of the Premier League. Unfortunately for Fergie, the Cameroonian was not the answer to his prayers. During his initial arrival to United during the 2003/04 season, media and football fanatics like were quick to search around who exactly Djemba-Djemba was. However, those curious to his past and potential were quickly given a glimpse of his style of play. An aggressive tackle on Sol Campbell in the FA Community Shield against Arsenal allowed him to quickly make a name for himself in the Premier League, but other than that – not too many other previous moments can be easily recounted.

It would be unfair to say that Djemba-Djemba was a flop at United because in all fairness to him, he was given an almost impossible task of filling in for captain Keano. As he did not rise up to the occasion, the former Nantes man was signed during a time where Sir Alex was trying various different schemes which would best compliment the current players he had and to aid in replacing Keane as best as he could. Manchester United were in a transitioning period upon his arrival with the departures of David Beckham, Juan Sebastian Veron and Fabien Barthez.

The optimism quickly faded into the shadows concerning Djemba-Djemba’s future with the club with irregular performances and struggles with injury. In the grand scheme of the matter, Sir Alex brought the defensive midfielder for his potential rather than his performances which may have been the biggest downfall of the deal that was in place nearly 10 years ago. As the Stretford End once cheered how he was so good, they named him twice – came and went quickly.

Personally, I’ll never forget Djemba-Djemba’s brilliant volley against Leeds United off a corner, but that was probably the highlight of his short career with United. Coming to United for any player is a daunting task but the Cameroonian has taken it in stride. At 32, he’s had time to reflect upon his experiences at a variety of different clubs and his time with United playing alongside some of the biggest football stars in the world, is another story to tell his family one day.

One response to “Remember, Eric Djemba-Djemba”