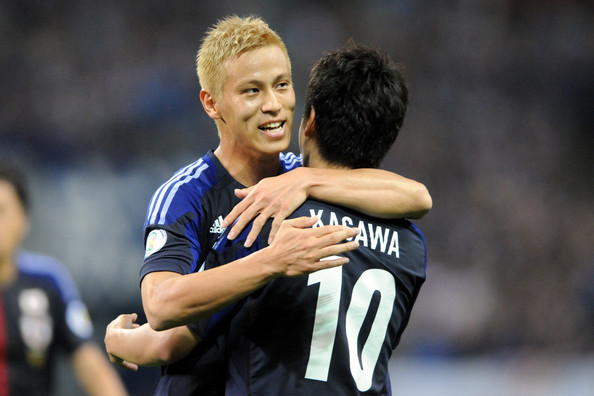 These past few weeks have been difficult for us all. No World Cup or European Championships to fill the post Premier League void has seen fans tune into international football that would be given a wide berth usually. The Under 21 European Championships offered a chance for everyone to become scouts and run the rule over Europe’s finest youngsters.

From there, the likes of Thiago have been hoarded as ‘must buys’ for David Moyes as he starts his new job at Old Trafford. Along with the under 21 tournament, the Confederations Cup has also provided a football fix. Spain have once again been lauded as the greatest team to ever beat Tahiti. Hernandez has scored goals for Mexico as he always does and even more scout reports have been written on possible signings.

One player who has received more attention than any other is the Japanese attacker, Keisuke Honda. Although Japan crashed out of the tournament in the group stage without a win, they impressed with their energy and willingness to adopt the ‘attack is the best form of defence’ motto. The CSKA Moscow man was a key player in the side and performed well in all three matches. The 27 year-old is also getting attention following his refusal to sign a new contract at his Russian club. His current deal runs out in January 2014 and that is one attribute which is mentioned in every news story, blog or speculative tweet linking Honda to United- he’s cheap.

But a player’s value or remaining contract should never be the driving force behind a signing. It can play a part, certainly, but there needs to be more. Of all the Japan players on show in Brazil, there is one who stood out above everyone else and he is already ours.

It’s been pointed out how Honda occupied a central role for his national side and in doing so, shunted Shinji Kagawa out to the left wing. It’s been claimed that Kagawa is no longer the star of the Japan team and that it is Honda who now acts as ‘chief playmaker’. Not from what I can see.

Kagawa may well have been played left wing, but he was central to all the good football played by Japan. His performance against Italy was exceptional. Yes he hit the bar when he should have scored, but he took his goal excellently and his intelligence in finding space and linking the play would have excited United supporters.

It takes a gifted player to be able to know when to stay out wide and when to ‘join in’. David Silva is a master at it. Kagawa has already said last season was a disappointment for him personally and that he is desperate to improve next year. I can think of a few signings who played a lot worse than Kagawa in their first season in England!

He started the season reasonably well and you felt he was just finding his feet when injury ruled him out for two months. Incidentally, his last involvement for United prior to the lay off was an assist for Hernandez to get United off and running to overturn a two goal deficit against Braga. On his return, he showed glimpses of brilliance. The hat-trick against Norwich was sublime with his second goal in that game outstanding.

He was moved from behind Van Persie to out on the left without securing either position. His form in the run in was good though and it is his Confederations Cup performances which have convinced me he will be a key player in United’s bid to retain the title.

When he was left out of Japan’s 2010 World Cup squad, Kagawa chose not to go on the stand-by list and instead worked hard on his game ahead of his transfer to Borussia Dortmund. Now, having failed to really cement his place in the United first team, he’s showed how he is prepared to again work hard and force his way into the side. He’s learnt to play left wing.

If United are unable to land Ronaldo or Bale this summer, the left hand side will be well and truly up for grabs. Nani looks set to move on (hopefully), Ashley Young splits more opinions than defences and Wilfried Zaha is an unknown quantity. If United secure the services of Thiago and retain Rooney, the side is a good one, potentially very good. We can perhaps dream of a Ronaldo return and seeing a midfield four of Ronaldo on the right, Kagawa on the left and Carrick and Thiago in the centre; but it’s more likely that Valencia will be the man on the right wing at the start of next season. With a rejuvenated Rooney linking up with RVP the team doesn’t look a bad one, does it?

With a player of Kagawa’s outstanding ability and a determination to recapture the form which earned him his move to Manchester, it could be the season where our left hand side problem is finally cured. For all the fuss made over Honda’s worth, Shinji Kagawa could be an invaluable component in Moyes’ Manchester United side.

2 responses to “Honda may be flavour of the month, but there’s plenty more miles in Kagawa”