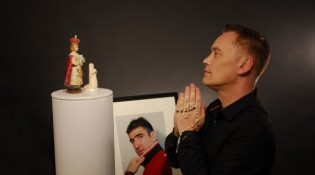 I first went to Old Trafford as a 4 year old. I should have been excited, after all United had Denis law, George Best, Bobby Charlton, Nobby Stiles, Paddy Crerand, John Conelly. Unfortunately it was to see United reserves play non-league Netherfield Town. It wasn’t even a Central League game, it was a friendly. I’d been mithering my older brother Tony to take me for ages, but he was 12 and liked going with his mates and didn’t want the responsibility of a very small kid with him. He took me to a few reserve matches all of which ended up in dull 1-0 victories to United, except a rather dull 1-1 draw with Liverpool reserves when there were one or two known faces including Shay Brennan, John Fitzpatrick, David Sadler and Johnny Aston in the team, having said that the United goal was scored by Carlo Sartori, supposedly the new George Best. The only player I recall in that Liverpool reserve side was a young Ray Clemence in nets (Liverpool’s first choice keeper was the rather rotund Tommy Lawrence) and I had a glimpse of Liverpool’s future tactics with half the match taken up it seemed by Clemence rolling the ball out to either full back and them passing it back for him to pick up and roll out again, a tactic which would win Liverpool a host of titles and cups in the years to come.

I didn’t get to go to a United first team game at Old Trafford until I was 7. It was United’s first home game of the 1969/70 season against glamour club Everton. Due to the fact that the World Cup was to take place the following summer, that season kicked off early, on the 9th August with Manchester United taking on the newly promoted Crystal Palace at Selhurst Park. Alex Stepney, United’s goalkeeper was injured at the time, so Jimmy Rimmer (later to become an excellent first team keeper with Aston Villa’s successful sides of the mid seventies to early eighties) was deputising. Of course I’d seen Rimmer in the reserves for United on those forgettable occasions our Tony had tried to put me off football for life. The United team had struggled against Palace in that opening game, drawing 2-2 with United ‘s goals coming from dashing Scottish winger Willie Morgan and the Stalwart Bobby Charlton. Now their first home game was against Everton on a Wednesday night August 13th, a match which provided me with that pessimistic streak all us true United fans carry deep in our hearts.

Football even then wasn’t cheap. It cost 2/6 for a junior (12.5 pence, now it seems cheap, but my pocket money at the time was 9d a week – 4p in modern money) to stand in the Stretford End Paddock, which was where the Stretford End curved round onto the sout stand with all the executive boxes. Basically the Paddock was the Stretford End for kids and people who didn’t like strangers urinating down the backs of their legs. It was a 7.30pm kick off and we arrived at the ground by 6pm. I’ll always feel sorry for youngsters now who will never see over sixty thousand spectators at Old Trafford with the massed ranks of United fans leading the chorus and singing their hearts out.

To the tune of Al Jolson’s Mammy “Oh Dennis, Dennis, I’d walk a million miles for one of your goals, oh Dennis.” To the tune of Gin Gan Goolie “We’ve got Willie, Willie, Willie Morgan on the wing, on the wing.” “You’re going home by Fucking ambulance.” “We don’t carry bottles we don’t carry lead, we only carry hatchets to bury in your head, we are the great supporters and that is everyone, we only hate Man City, Leeds and Everton,” and to the tune of Land Of Hope: “We hate Nottingham Forest, we hate Liverpool too (and Leicester), we hate Manchester City, but United we love you.” “I get a funny feeling inside of me, when I see United score, maybe it’s because I’m from Manchester, where the king is Dennis Law.”

The crowd around us swelled until we could hardly breathe as the ground filled with more and more people with the approach of kick off. We were down by the wall and tried to climb up and sit on it, only to be shoved off it by the stewards. Standing on tip toes I could see the players from hat seemed like the legs up, before the weight of people from behind caused me to duck suffocatingly beneath the mass of bodies. My cousin Phillip seemed most perturbed. He didn’t like big crowds or wide open spaces. He caught his asthmatic breath and looked around him nervously, the sweat shining off his face accentuating his teenage acne. From the scoreboard end the Everton fans were singing. “Everton Everton,” in the gaps the United fans shouted “shit shit.” My shoulders were squashed inwards, my feet were suffering cramp from standing on tip toes. Would I be able to see over this wall when Bobby Charlton score. There were more songs about Dennis law. But as the teams came onto the field choruses of “Kiddo, Kiddo” rose up from around the ground hailing United’s young striker and more importantly to the United crowd local boy made good, Brian Kidd. The Everton team in their Royal blue shirts were full of big names. Howard Kendall, Alan Ball, Brian Labone, Ray Wilson, Colin Harvey, Jimmy Husband, Joe Royle, Gordon West. Our Tony pointed out that there were so many internationals in that team and he was worried as United were without Nobby Stiles, Eire international left back Tony Dunne as well as first choice goalie Alex Stepney with Jimmy Rimmer who went on to play for Arsenal and win a league championship medal with Aston Villa deputising .

The match took on a familiar pattern with Everton seeming to be first to every fifty fifty ball. United may have been the best team in the world, but on this particular night Everton made them look very much second rate and the Goodison school of science made my first trip to Old Trafford an unhappy one. The final score was Man United 0 Everton 2; I had seen my first United game at Old Trafford, but it was to be some time before I could understand what our Tony had got so excited about. Still I’d seen all those players from my football cards in the flesh, it meant a lot to me, and with the way some of them played, I had no doubt that I could and would one day do much better than them when it was my turn to pull on that red jersey in front of sixty thousand people and hear my name ringing from the terraces.

Our Tony was glum after the game. “They should never have had Wilf McGuinness as manager and let Matt Busby move upstairs to general manager, if Nobby Stiles and Tony Dunne had played we would have won, and if Bill Foulkes had been left out we would have stood a chance. Tony’s vitriol poured on the veteran Bill Foulkes, he was past it Tony said, United needed a new centre half and Denis Law didn’t look fit. I walked silently hurrying in our Tony’s footsteps in the night air. He’d already called me a jinx and said he’d never take me to another United match again, and to this day he’s been as good as his word.

SN would like to thank Terry Christian for granting us permission to use an extract from his 1999 book Reds In The Hood. His website has many blogs on United, music and a bio section which are all worth reading.

Christian’s Naked Confessions Of A Recovering Catholic Gig at Stockport Guildhall next Friday 28th may be something of interest being an all Reds line-up. Terry Christian himself, Mancunian Poet Mike Garry and singer songwriter Danny Mahon will all be in attendance. Buy your tickets now. 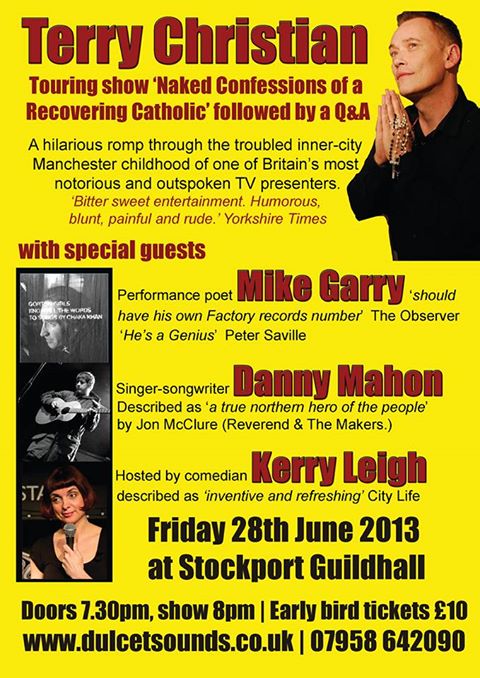