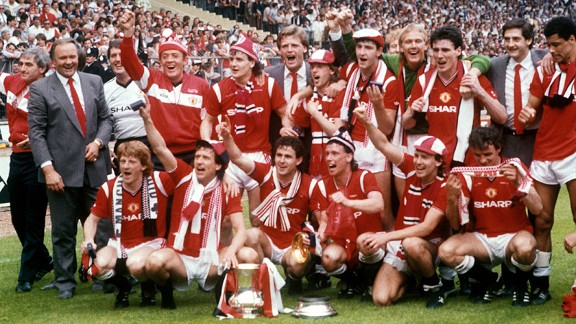 In the aftermath of Sir Alex Ferguson’s retirement announcement there was all the clamour around who would be appointed his successor, whether the success we’ve enjoyed for 20 years would continue, or would we go back to the 1970’s and 1980’s.

For me, at 28, Fergie is all I’ve really known. My first game at Old Trafford coincided with Eric Cantona’s full home debut in a 1-0 win against Norwich in December 1992. I have seen 13 league titles and countless other trophies and seen some of the greatest teams the club has ever assembled. I am unbelievably fortunate that I have seen such success.

But there is a jealousy.

As you grow up you evolve as a United supporter. Your first games are about the thrill of being up close to your idols, the anticipation of reading the programme on the way home, making a note of the attendance to put on your bedroom wall chart when you get in. Now, it is about train journeys, early breakfasts and beer before the cab to the ground.

It is in those four hours before kick off at 3pm on a Saturday (when that actually happens) that in the company of older supporters such as my dad that the talk will go back to years gone by. Away days at the likes of Luton and getting beat and still recalling it as a ‘great day’. The arguments over the quality of Martin Buchan over Rio Ferdinand, ignoring accolades and hearing that Buchan was ‘a player’. I love those stories. It’s a part of the history of United and even though I wasn’t there, I still want to know about that lean spell where we were more likely to sustain a cup run than a title charge. I love the comparisons. Asking if the likes of Wilkins, Stapleton, Whiteside were really that good. Of course they were. The arguments for players of that era are so compelling that even though I rarely saw the man play in the flesh, I now say that Robson was better than Keane.

For lads my age and younger it’s difficult. It was a different time back then, cheaper, rougher, poorer in quality on the pitch but richer in the banter on the terraces. It is why the ‘United Before Fergie’ Twitter account has evoked differing responses. It is loved by those who can remember those days and I too enjoy seeing people reminisce. But there are others who prefer to look at the club now and the support that is needed to make sure the club doesn’t go back to that unsuccessful period. Many though, are maybe secretly hoping they do.

Because for all the away days and Euro trips you can go on, in twenty years time will an 18 year-old lad ask you in a Manchester boozer on matchday ‘how bad were we from 2004-2006?’ Will arguments break out over whether Bellion was as bad as Bebe? Will people recall the good old days when you could go to Old Trafford and get a plastic bottle of Singha poured into a plastic cup at a snail’s pace? Maybe, but it won’t quite be the same.

I personally would never want to see United be unsuccessful. I hate them losing any game and was even annoyed with the result at the Hawthornes on the final day! But I realise that ‘cycles’ are inevitable. United have been lucky that in Fergie we had someone to break Chelsea’s ‘dominance’ and even stop City in their tracks by reclaiming the title last term. It’s not certain that will happen with Moyes. This is the first moment supporters from the ‘golden’ generation will have to maybe see a United who aren’t top dogs. A chance to get behind the team in the way those who watched those painful games back in the eighties did. An opportunity to shed the glory hunter tag and tell people in twenty years that we were actually there when the team were poor. At the moment, some of the poorest United sides I’ve witnessed have won championships.

Next season is going to be a pivotal one for us all. The old guard of reds may soon decide that they’ve seen and spent enough and it is up to younger supporters to take over the mantle and follow the team as best we can. It will be interesting to see the reaction to two defeats in a week, an early exit in cup competitions and to signings that fail to deliver (which all happened under Fergie). In the pubs, on the train home, we’ll criticise. We did under Fergie and I believe that is a right that everybody has, to say when things aren’t going right. But for those 90 minutes, everyone needs to get behind the team. They are wearing the shirt and so should be supported just as much as those who have worn it in the past.

For young supporters, we are constantly reminded that there was a United Before Fergie; there will be one long after him too and one after Moyes. That’s the trick. You don’t support one man, one manager, one team, one era. You support one club, Manchester United.

One response to “There was a time before Fergie; there will be one after him”