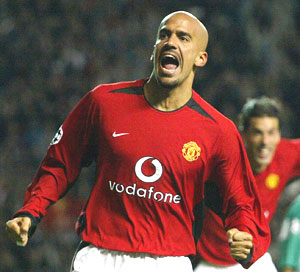 Of all of the Manchester United members in the past, present and in the future, the transfer of Juan Sebastian Veron may go down as one of the worst in the history of the club simply because of his lack of success – but I strongly disagree. The real reason why the Argentinian didn’t make a larger impact on United during his stint at Old Trafford was because of one aspect – timing.  If Veron had stayed a bit longer he may had developed into United’s best central midfielder; however, upon his initial arrival to the club there were already plenty of talents vying for four midfield spots. With the likes of Roy Keane, David Beckham, Ryan Giggs, and Paul Scholes all occupying their respective positions this at times left little to no room for Veron, yet this is no indication that he was a flop.

I believe Veron fitted the United mold and as previously mentioned, his placement in the squad came down to poor timing. Upon his arrival to Old Trafford, Veron even indicated how surprised he was to be joining such a world class club: “So there I was hoping to play for Sheffield United and here I am at Manchester United.” And the rest, is history. Sir Alex Ferguson made the right choice of signing Veron in 2001 for £28 million because he throve in the Italian scene. Many will question, why even bother speaking about such a “non-factor” in the ranks of some of the United greats? I beg to differ, and in fact believe he was one of the best footballers in the world during his time, just never fully grew into his own in the Premier League, especially with United. Having only featured under Sir Alex from 2001/o3 he immediately was scrutinized for the lack of success.

To his side rushed Ferguson who made it quite clear “Veron is a fucking great player. And you’re all fucking idiots.” Whether Fergie was standing up for the Argentine because of his true beliefs in Veron or to just brush any media scrutiny under the rug, it appeared to many that Ferguson was his biggest supporter. While numerous considered him to be a flop, Veron just couldn’t seem to find his rhythm in the Premier League. Understandably, after being sold in 2003 to Chelsea for half the price United bought him for, The Times listed Veron’s transfer to United as one of the 50 worst transfers ever in EPL history.   load of bollox if you ask me, but we’ll save that for another day.

Certainly, it’s hard to sit here and argue that his stint at Old Trafford was a success because it was far from it; however, the impact he made in the club was. During Beckham’s young years the Argentine was able to help grow a budding talent who played very similarly to that of himself. Veron’s tailor made passing and beautiful vision seemed to quickly heighten Beck’s own play and allowed him to develop into one of the best footballers in the world. Please tell me there is some sort of recollection of Beckham and Veron’s pre-match ritual madness? In today’s modern era, if you think Messi and Crisitiano Ronaldo have some skill, I’d like for you to have seen Veron and Beckham ping balls 50 plus yards from one another back and forth, without the ball touching the ground. This ritual seemed to become an instant hit, and seemed to pay dividends in match situations – Veron hit a superb pass which found Beckham perfectly whom slotted the ball past Birmingham’s goalkeeper.

Juan Sebastian Veron could have flourished deep in the United midfield, but at the time Roy Keane and Paul Scholes were occupying those type of positions. As Veron made the switch from the Italian style to that of the English style, there is no question he had trouble adapting to the faster paced Premier League but we must take nothing away from his adaptations he made from the first season at United to his sophomore season. Veron really came into his own in 2002/03 as he seemed much more comfortable on the ball especially in the Champions League where he seemed to be the heart of United’s success tallying four goals in the group stages.

As Veron is seen as failure in England and in particular Manchester United, this does not mean in any case that he is seen as a bad footballer. With a medal collection as expansive of 13 medals spanning numerous continents, luck is not a factor in this case. Even with United, Veron was a visionary all throughout the park who had the ability to pick a pass whether it be five yards away, or 60 yards down the pitch. The hard working midfielder always kept his head up and was a true playmaker in every essence of the word, but with numerous superstars in the United ranks at the time, it is hard to get the play going through one particular player. As numerous talents were in the squad at the time of Veron’s arrival, Sir Alex Ferguson’s signing of Veron brings one main thought to my mind – Sir Alex did not need him, he simply wanted him because he knew he was a world class footballer.  Over the past 26 years in charge of United, we quickly understood that the Scot always had the clubs best interest at heart.