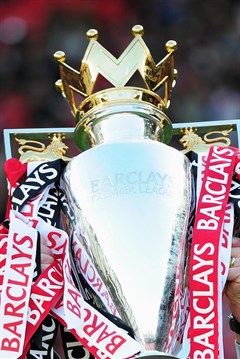 The Premier League fixture list for the forthcoming 2013-14 season was released this morning and the headline news surely has to be United’s opening five fixtures, which will be a baptism of fire for new supremo David Moyes.

The Red Devils face League Cup winners Swansea away on the opening weekend of the season (or, most likely on bloody Monday night once Sky get their teeth into the programme). The first game at Old Trafford will be even juicier for Sky. Indeed, it’s almost as though they’ve had a hand in writing the fixtures themselves… For United face the Jose Mourinho Bandwagon, also known as Chelsea. I imagine the marketing wallahs are already creaming themselves.

Things hardly get any easier in our third fixture: Liverpool. At Anfield. And we haven’t even got August out of the way yet. Moyes will be given some respite in our fourth tie – newly promoted Crystal Palace at home, after an international bloody break – but then comes arguably our toughest match of the season. On the weekend of 21st September, it’s the first Manchester derby.

Conceivably, by late September, we could already be well behind in the running. After all, Mourinho’s Chelsea were always quick out of the traps, racking up points as swiftly as possible. They changed the way United prepared for a season. We could no longer find our way into form. We had to hit the ground running. And, apart from a rusty performance and deserved defeat against Everton in our opening fixture last season, that’s exactly what we did.

Manchester city’s first five fixtures, by contrast, include two newly promoted clubs – Cardiff (away) and Hull City (home) – as well as two clubs many have tipped to struggle this season: Mark Hughes’ Stoke (away), and the internally combusting Newcastle (home).

Chelsea kick off with their perennial home tie against a newly promoted side, just to make sure Mourinho gets a nice game to bed-in. The only fly in the ointment for the Stamford Bridge mob may be a potentially tricky visit to Goodison to face Roberto Martinez’s Everton, and, of course the United game at Old Trafford. These two games notwithstanding, their opening five fixtures also look fairly simple. They also face Aston Villa and Fulham at home.

So it’s key we get off to a good start. Not only because of other teams – the opportunity they have to steal a march on us – but because of the potential damage it could do to Moyes confidence, or rather, the confidence in Moyes. I’m not for one minute suggesting that if United struggle in five games he’ll start to feel twitchy, but I really don’t want to have to see the glee in ABU faces if we start badly. I don’t want to hear talk of eras ending, of empires crumbling. All that jazz.

And besides, what if we think about our opening matches as an opportunity? Surely the players, the management, the fans, will all be desperate to start well. Surely there’ll be an extra incentive. What if Moyesey finally wins that first game at Anfield, which escaped him in his long reign at Everton? What if we start like a house on fire? Lay down a statement of intent. If we had a steady run of uninspiring fixtures like City have, maybe we’d have been tempted to start a little lazily. With these fixtures, we’ll need to press our pedal to the metal from the very first whistle.

And all we need to do is look to last season to see how this can be done. Last year we faced Everton, Liverpool, Chelsea away before the end of October, and by mid-November we’d also faced the two north London rivals Tottenham and Arsenal at home by 3rd November. City away came in December, rounding off a very tricky first half of the season. And Spurs (home), and Everton (away) aside, United were excellent. And even in that Spurs home game, our second half performance was very, very good. Our results against our rivals improved greatly last season, especially in that first half of the season. The difference, many commentators claimed, was Robin Van Persie. We racked up enough points in these difficult games to have the title wrapped up by the time the clocks went forward (though we didn’t dare tempt fate or take anything for granted then, not after what happened at the gutwrenching climax to the 2011-12 season).

So maybe, just maybe, the difficult start will be a blessing in disguise. There’ll be no room to hide. We’ll have to be on our A-game from the very start. And I think that’s a good thing. The league will be tighter this year. Our rivals will improve. We need to step up to the plate, remind everyone who’s sheriff in this town.

ABOUT THE AUTHOR
Andrew J Kirby is the author of ‘Fergie’s Finest’, which was released last week, and by no means cashes in on Fergie’s retirement… Take a look on Amazon now.