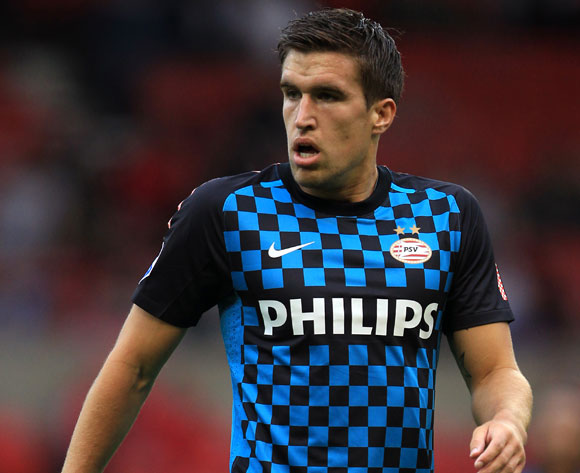 Netherlands U-21 captain Kevin Strootman looks certain to be heading towards Old Trafford this summer.

The rumor mill is in overdrive with the reports of Manchester United agreeing a fee with PSV for the transfer of the 23-year-old.

SN provides a scouting report of Strootman and what one can expect from him if he joins David Moyes’ troops in the transfer season.

They desperately required someone with the pace and stamina to do the dirty work in midfield. This even compelled Sir Alex Ferguson to use Phil Jones as a make-shift defensive-midfielder.

Strootman’s arrival will, however, solve this problem for once and for all.

The Dutchman is a lively box-to-box midfielder and arguably one of the best exponents in winning possession and intercepting the oppositions’ attacks.

As soon as he notices a player making a dangerous run anywhere towards his side’s goal, Strootman always pops up in front of the attacker and tries to halt the run with robust tackling, even if it means the youngster has to move out of his standard position to do so.

He forms a one-man wall by coming in between his defenders and the opposing attacker.

Moreover, unlike all the United midfielders, Strootman won’t allow an attacker to easily get past him. He makes his duty to win the ball back in such cases and hence, the former Utrecht star made the highest number of tackles (140) in the Eridevese last season.

Strootman’s mobility and stamina allow him to float all over the pitch and provide the extra defensive protection. When his team is caught on the counter-attack, Strootman quickly analyses the area which needs cover and tracks back there to prevent his colleagues from getting outnumbered.

This characteristic of the player can particularly help United as Strootman often helps his full-backs in 2-versus-1 situations and the Red Devils have looked the most vulnerable on the wings over the past 18 months.

Even during attacking corners, Strootman generally stays at the edge of the box so that he can fall back smoothly. He might not always win the possession back in the above cases, but at least slows down the pace of the game and gives his teammates the time to re-group.

In situations when Strootman’s teammates are doing the pressing work and trying to win the ball back, he takes up their positions and closes the channels.

As shown in the image below, the Daley Blind (the left-back) is needed to come out of his position in order to make an even 2-versus-2 battle on the flank. Strootman notices the gap opened up by the full-back and momentarily takes up the latter’s position in order to prevent any German player from the exploiting the channel.

Many players in this case would have unnecessarily charged towards the left-wing (even though they weren’t a man short in that area) and leave a massive hole near the edge of the penalty area. 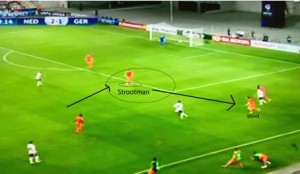 Finally, Strootman also presses exceptionally well. He pressurizes aggressively only when there’s a probably chance of winning the ball. Other times, he maintains a compact position- nor too far from the player, neither, too close to him.

Basically, Strootman has an intelligent footballing brain and understands when to press and when not to.

Strootman has a wide vision, even though his passes are usually short.

The 23-year-old also possesses a deadly left-foot and can test the ‘keeper very well from distance.

He is a controlled and patient footballer and waits until a decent opening is formed before venturing into the attacking third, as can be seen from the following two images. 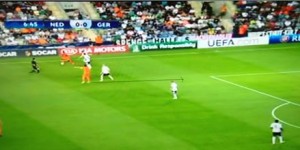 The PSV starlet times his runs so cautiously that he is rarely caught way high up the pitch.  If he’s being tracked, Strootman stops his run until the marker is drawn towards the action area or decides to stop marking the Netherlands international owing to the fact that the latter doesn’t seem to pose much of a threat.

During counters, Strootman utilizes his pace exceptionally well to surge forward. If Moyes plays with a direct attacking approach, Strootman can be useful during attacking transitions.

It is however to be understood since Strootman shows willingness to get forward, he’ll be best utilized when there is a player like Carrick playing behind him. If you give Strootman the deep-lying midfield role, his attacking runs could leave the defense vulnerable at times.

United already have players with great leadership qualities but Strootman is a born-leader.

He has already captained his senior national side and although he might be too young for such a role, the truth is Strootman commands his players in an exemplary fashion.

The former Sparta Rotterdam youngster dictates and motivates the team and virtually operates as the on-field manager due to his impressive understanding of the game.

Although he’s unlikely y to be considered for the captaincy role at United until both Nemanja Vidic and Patrice Evra leave the club, I feel Strootman has all the ingredients to lead the Red Devils like Roy Keane.