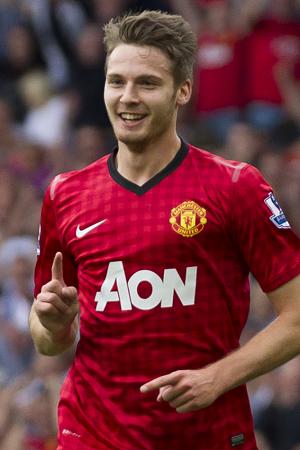 With no domestic football on the box for a few more months yet, the rumour mill is starting to warm up nicely thanks to the Twitter ITK’s coming out from their hibernation.

Aside from their comical drivel, most of the written media outlets contained a story that is covered in logic. As early as last year when he had already delivered us glimpses of his talent, Nick Powell was being mentioned with great frequency concerning a temporary switch away from Old Trafford on loan to get valuable minutes under his belt.

He was linked with a vast number of Championship and even some Premier League sides after finding it tough to establish himself in his debut season in the top flight.

Despite catching the eye immediately with a stunning goal on debut against Wigan, which was very reminiscent of a certain Paul Scholes, Powell’s game time was limited to a meagre 6 appearances due to various setbacks.

Powell impressed in virtually every game he featured in, including an encouraging performance in the cauldron like atmosphere in Galatasaray, something that would have been a completely alien experience for a man of such tender age.

Understandably younger players need to be nurtured and given ample time to acclimatise to new surroundings and significantly superior beings, but to only feature on 6 occasions is somewhat of a disappointment given the ideal start he made and the euphoria and buzz that comes with seeing younger players given license to thrill. In this respect, Powell has not kicked on as we had hoped, albeit due to circumstances that he could not control such as injury.

As one door closes, another one opens- the second retirement of Paul Scholes, the likely departure of Anderson and the unfortunate tale of Darren Fletcher means that Powell may well feature on a more regular basis under David Moyes.

Moyes has already gone on record stating that he is a vehement advocate of developing young talent and that tradition would not cease whilst he was at United. There is credence to Moyes’ claims, having discovered a certain Wayne Rooney and bringing through Jack Rodwell at Everton.

As much as fans love to see young talent embarking on the first-team, central midfield is an area where we need proven quality, especially this season. Talk is very strong that we will be bringing in at least one player in that area- Kevin Strootman is virtually a United player and with rumours linking us with Barcelona’s Thiago Alcantara who is a classy player with much potential like Strootman, Powell may see the immediate avenues towards the first-team to be blocked.

With certain impending arrivals, Powell needs to get first-team experience away from Old Trafford. Loan moves for Tom Cleverley and Danny Welbeck in recent years accelerated their progress and got them closer to taking the field at Old Trafford. Powell would surely be in a similar boat, as long as he was featuring week in week out with any potential takers (unlike the Angelo Henriquez debacle at Wigan).

There would be no shortage of takers, Powell has already shown his goalscoring knack and ability in the red of both Crewe and United. He was linked with a whole host of takers from as early as last January, and fresh reports have linked him with a move to Doncaster, who are managed in the Championship by Paul Dickov.

The Championship is a notoriously competitive and unpredictable league, where there is a more level playing field, which means that the extra bit of quality stands out. If Powell were to move to the Championship, he would be up against fierce opponents and probably guaranteed to be selected every week.

That said, should Powell move to another Premier League side, like Evans, Cleverley and Welbeck, he would be pitting his wits against the very best and becoming more and more accustomed to the demands and rigours of life at the highest level.

Powell’s ability would surely interest the three newly promoted teams, having been linked with Crystal Palace as part of the Wilfried Zaha deal which would have seen him go on loan in the opposite direction for the second half of last season.

As long as Powell sees action in the 2013-14 campaign, whether that be at United under Moyes or elsewhere, the benefits from regular football will do wonders to his confidence and development.

The boy has serious potential and undoubted talent already, he cannot afford to be stifled, too many English players get lost in the system due to lack of action and the ever-increasing amount of foreign imports arriving in the highest level.

This is why for now he needs to go somewhere where he can enjoy his football and play with no inhibitions. A loan move for Powell would benefit both parties, and we would see the rewards and results of a temporary move away in the future.

Powell will go far with Manchester United, as long as he is not on the sidelines next season.