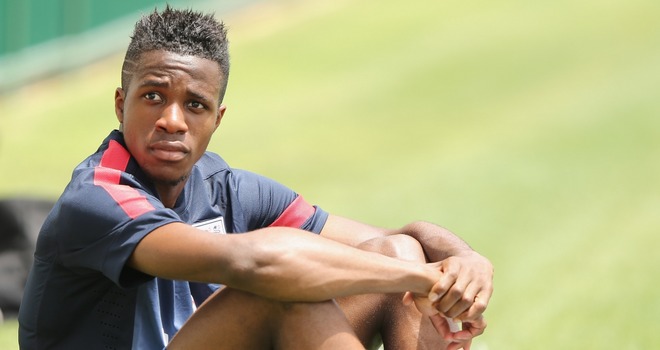 The 20-year-old was the staring light of Crystal Palace’s incredible 2012/13 campaign that saw Ian Holloway’s men return to top flight football after spending eight seasons in the country’s second division.

As we look forward to Zaha plying trades at Old Trafford, SN provides a scouting report of the youngster.

Zaha primarily plays as a latter-day archetypal left-winger, who regularly drifts in from the flank.

He usually positions himself so wide on the touchline that if the full-back tries to close Zaha, the former risks opening the wide channel (as shown below). 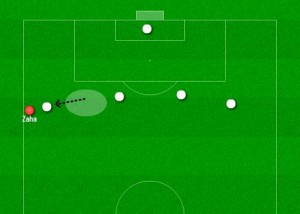 After that when Zaha gets the ball on his feet, he tries to cuts in onto his favored right foot to shoot or cross.

As stated above, the Englishman can also be occasionally seen shifting centrally (mainly into the “hole” behind the striker). This helps him to get rid of the full-back marking him, who otherwise could leave considerable space on the wing if he keeps on following Zaha. 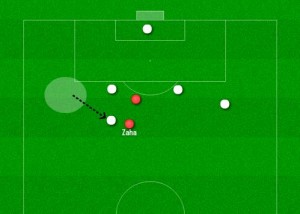 Although Holloway used Zaha in a variety of attacking positions, chances are, he’ll spend most of the minutes at United on the left-wing.

Directness and Confidence on the Ball

Just like a young Cristiano Ronaldo, Zaha is a confident man on the ball.

He’s not afraid to run straight at the defender and showcase his dribbling finesse, albeit the England U-21 star might not be always successful in beating his marker.

Even when outnumbered in 2-versus-1 situations, Zaha has the ability to find space and get the ball into the box. Moreover, not only does Zaha possess lightning fast pace and ever-improving dribbling skills, he also imposes a strong physical threat.

Zaha also likes to link-up with his colleagues in the final third via quick back-passes, flicks and one-twos, but due to the lack of technique and communication among his teammates, he usually ended up giving away possession in such cases.

A characteristic that makes Zaha a relatively unique and distinct 20-year-old is his exceptional understanding of the game.

True, the lad’s decision-making is atrocious, but Zaha can read the opposition’s and his teammates’ mind very well. He can predict a pass even before it takes place and in the attacking third, he has a penchant eye to get into pockets of space.

In addition, due to his admirable positional awareness, the Crystal Palace youth product is rarely caught way high up the pitch.

For a testament of Zaha’s impressive reading of the game, let’s look at the following two images.

As you can see, Zaha has tucked in from the wing to prevent the opposing midfielder any space to pass in between the lines.  However, at the same time, he has positioned himself in such a way, that when the ball is passed to the unmarked right-back Iñigo Calderón, Zaha is briskly able to close down the defender and hold back the Spaniard from running down the flank with the possession. 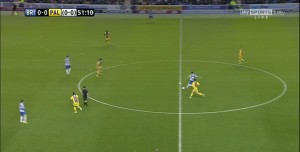 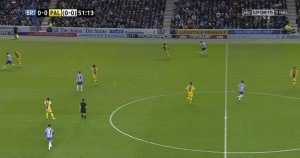 A mistake many wingers make is that when they pluck in from the flanks while defending, they leave way too much space for their opposing full-back. On the other hand, Zaha was intelligent enough to not let this happen.

An area that Zaha needs to improve is his decision making.

Sometimes, the youngster may try to dribble too much or produce an astonishing “Hollywood” pass or one-two, when he can simply play the ball to one of his free teammates.

Not only that, while defending, Zaha might showcase laziness in falling back and doing the donkey work, even though he’s in a position to do so. His tackling can also get quite messy and the youngster is likely to commit a foul when an opposing player seems to be running away from him.

However, Zaha’s defensive issues only occur once in a while and also mainly because Holloway’s set up at Palace was such that the team’s counter-attacking strategies revolved around Zaha and hence, he had to stay relatively high up the pitch.

When he gets the ball while facing towards the goal, Zaha can be a menace on the wings.

However, when he gets the ball with his back to the goal, the Championship’s PFA Player of the Year can get very frustrated.

Zaha can’t operate comfortably in such situations and needs at-least some yards away from the defender so that he can twist and turn and get himself to face the goal.

This is mainly because of his mediocre first touch and under-developed technique on the ball, making it difficult for him to survive in congested areas.

To flourish in the Premier League, Zaha must learn how to get in front of the goal with a touch or two after receiving possession with his back to the goal.

Other than that, Zaha also needs to work on his aerial prowess and finishing.