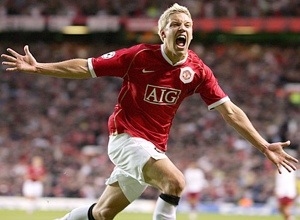 Some of you are probably thinking, what ever happened to Alan Smith? Others may scratch their heads puzzled as to whom exactly this Smith character is and may narrowly remember that bleached-blonde striker turned midfielder who tallied a few memorable goals for us during his career. As he joined United in 2004 for £7 million the fresh-faced midfielder was seemed a natural fit in Sir Alex Ferguson’s squad. With a bit of added pace and with immense commitment, it seemed as though Smith would make an immediate impact at Old Trafford – and he certainly did, for a short while at least.

Admired by Sir Alex, the former Leeds United striker was courted by the long-time Scottish manager whom brought the lad over to Manchester in hopes he could one day fill Roy Keane’s shoes. As Sir Alex groomed Smith to be the natural successor to Keane, initially it seemed as though all was well in the world. The now 32-year-old scored in his debut for United in a 3-1 victory over Arsenal in the Community Shield, while he also netted in his Premier League home debut with an absolutely breath-taking volley against Norwich City. Two promising performances by the Englishman offered a sense of hope that Keane could be replaced when his time to retire came.

Fergie spoke very highly of Smith as well as Keane had explained the Scot “Roy sees characteristics in Alan that he saw in himself as a young player, which could help Alan develop into a very good player in that position.” The natural center-forward was thus converted into more of a holding midfield role which Keane managed ever so well, and while Smith seemed to adapt nicely he never truly seemed compatible with his new position. However, any praise that Fergie or even Keano gave to the Englishman was taken in stride and despite his positional change, his commitment and work rate never faltered.

As Alan Smith took on the anchoring position in the 2005/06 season while Keane was out with injury – United fans were quickly given a reality check that the youngster just did not seem fully comfortable in the midfield and rarely looked effective. With comparisons to Keane (unfair at best) United fans were quickly grounded in the fact that there was no matching Roy Keane’s commitment in his defensive duties – something in which we will discuss more in depth in the coming weeks.

Funny enough, as Ruud van Nistelrooy left for Real Madrid in 2006/07, it seemed as if Smith may get his time to shine at center-forward. Sir Alex stated “We are going to convert Alan Smith back into being a forward. He will be back in training soon and should be available by the end of August.” Through crunching tackles and a few moments of brilliance on his end, the boyish figure and inability to control the match both from the midfield and forward positions – Smith seemed to disappear off into the distance.

Yet, the defining moment of Alan Smith’s career came in February of 2006 when United took on Liverpool in which Smith broke his leg and dislocated his ankle after blocking a shot. One of the most chilling football moments I’ve ever witnessed live (Cisse’s broken leg may go down as the most gruesome in my memory) I couldn’t help but feel for the lad. The Liverpool fans, however, were too busy rocking the ambulance, putting their class on show for the world to see. But from the moment Smith went down and signalled the trainers on the sidelines, Manchester United and Smith knew this was it. Smudge as his teammates called him, was never really able to return to his “old self” after that gruesome injury he faced in 2006; however, he did not let that moment define the end of his career.

At 32, the once bleached blonde haired Manchester United man, now currently plays for Milton Keynes Dons. Can you believe a little over six years ago, Smith was walking the back rooms of Old Trafford and in the mix for a first team position? I certainly cannot and without actively thinking, it takes a moment to remember who he truly was as a footballer. As Smith may not be the most notable player to ever throw on a Manchester United jersey, he may go down as one of the most iconic with his boyish face and prominent hair color which certainly stood him in a league of his own, in that regard.

We certainly cannot forget a man who previously played with Leeds United and made public statements the he would never play for Manchester United, but can we blame him for signing? Any player that gets a chance to throw on the United kit, understands the immense responsibilities that come along with it – and without question Smith understood the task. The Englishman just was unable to carry out the task to the high standards that United supporters have for their club.

We certainly cannot knock his dedication to football as he continues to play at a high level. The once fresh-faced boy from Leeds United never gave up hope on his football career, and for that we must commend him. For the younger generations who never had the pleasure of watching Smith feature in Sir Alex’s starting XI, take a look as he’s gone, but certainly not forgotten in my eyes.