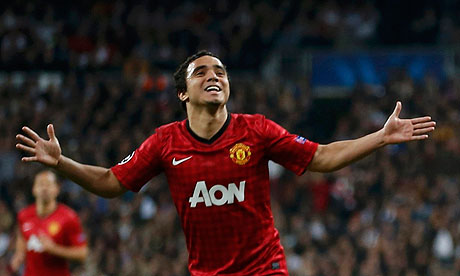 We enter the final segment of the three-part series analyzing David Moyes’ potential starting XI at Manchester United next season.

This article will look at the four possible wingmen and don’t forget to let us know your thoughts on the final team in the comments section below.

Rafael da Silva is a shoe-in for this positing. The Brazilian had a stellar 2012/13 season and is likely to play an important role in Moyes’ team for next term.

However, Rafael will need to heavily invest in improving his defensive skills next as he can be often caught way high up the pitch, while his tackling can also be clumsy at times.

Thus, Moyes might ask Rafael to cut down on his attacking runs in order to ensure a compact backline. However, when he does venture forward, the 22-year-old will have the onus of providing width, linking-up with right-winger and producing pin-point crosses for the strikers.

Moyes’ first official signing as United’s manager, Guillermo Varela, will serve as the back-up for Rafael.

For the left-back role, Patrice Evra’s at Old Trafford could be numbered.

He might be excellent while going forward, but the Frenchman doesn’t track back in time to defend. His pace is gradually waning and, he’s becoming more and more lethargic when it comes to doing the dirty work at the back.

Moyes’ former footballing disciple Leighton Baines could be the ideal man to replace Evra at the Theatre of Dreams.

The England international is the most creative full-back in England right now, having created the most number of chances in the Premier League last season.

Baines is equally good when it comes to fulfilling the defensive duties and the 28-year-old can also provide an element of attacking threat with his set-piece deliveries and excellent crossing.

Moreover, with Baines marauding down the left-wing, Moyes could afford to limit Rafael’s attacking runs so that the right-back is not found in the wrong positional zones.

That is, like at Everton, Moyes could emphasize on attacking down the left via Baines.

The Toffees carried out 42% of their attacks down the left-side and just 31% down the opposite wing. This meant that the right-back had relatively less attacking pressure and hence less chances of being caught out-of-position, although he did play an important role in switching the side of play (with Rafael’s explosive pace a good ingredient for this tool).

However, although Baines might be one of the ideal summer signings for many United fans, the chances of the Red Devils actually buying him look slim, but I still pick the Englishman for the club’s left-back role under Moyes.

Right Wing – Why Valencia will get the nod

When it comes to helping the full-back, Valencia never disappoints his team this is likely to work in his favor as Moyes gives fundamental importance to having a good and organized defensive shape and structure.

Valencia is also well suited for the Scot’s counter-attacking approach since this tactic provides the 28-year-old with the opportunity to use his speed and exploit the space behind the left-back, rather than try to unsuccessfully beat him with trickery and skills.

For an instance, take United’s two most important away wins last campaign (against Chelsea and Manchester City). In both the games, Fergie set up his troops to exert pressure and then catching the opposition on the break (like Everton often did under Moyes) and in both the games, Valencia flourished (even providing an assist for a Robin van Persie).

“A display which makes it hard to see why the muscular Ecuadorian does not start more often. Defensively aware, he pinged a pinpoint cross in for Van Persie early on and gave Cole kittens all day.”

“Such an important player for the Red Devils, his return was an obvious boost as he linked up well with Rafael, combining relentless drive in the first half with strong tracking back throughout…”

The Rafael-Valencia partnership was lackluster last term, but Moyes will surely want the two to work on this aspect as Valencia is a kind of player the 50-year-old would love to have in his line-up.

Ashley Young has never really impressed in the United shirt, but the former Aston Villa man is likely to get the nod for the left-wing role, due to his experience.

Zaha is a phenomenal talent and his ability to directly run at the full-backs will provide a new form of wing-threat to United. However, he’ll still need some months to adapt to top flight football, therefore, Young gets the left-wing slot. 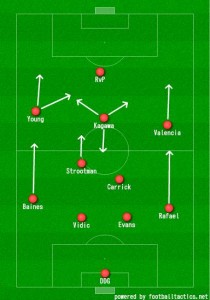 3 responses to “Part 3: How will United line-up under Moyes next season?”