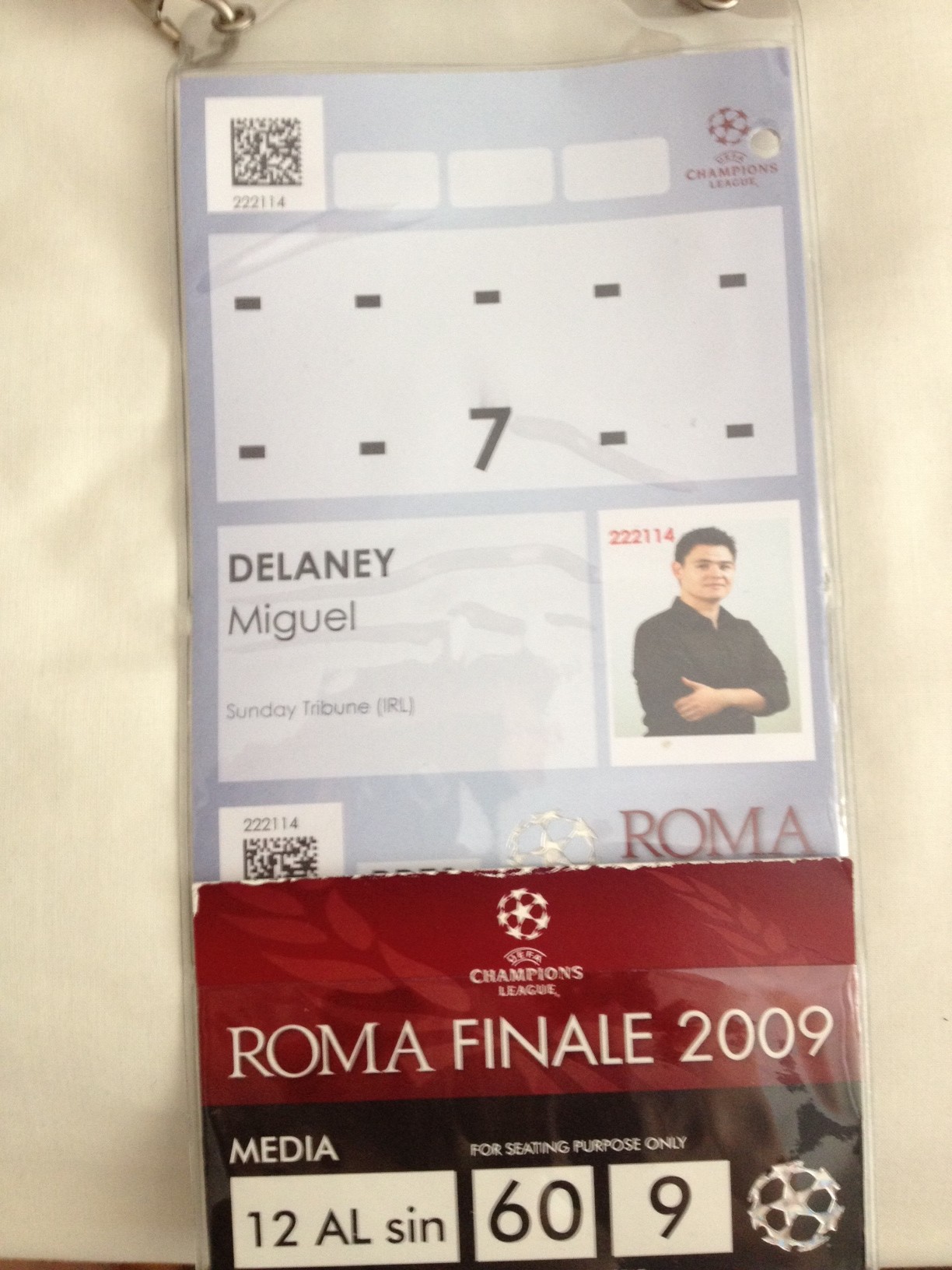 I don’t believe everything I read. There are few journalists I follow closely when it comes to Manchester United, but that doesn’t mean the vast majority are rubbish. They’re not.

Getting paid to watch football, free tickets and a chance to interview the biggest stars in the game. Becoming a football writer is a dream job for many, but one that comes with a great deal of responsibility and pressure.

I spoke to Miguel Delaney this week about delivering transfer stories, gaining solid sources, priorities for likeminded journalists and much more. Keep an eye on his United stuff this summer…

To get the ball rolling tell us how it started with you becoming a familiar figure in the Manchester United news fold. Do you have a favourite team or *claim* to be neutral?

Well, I was football journalist with the Sunday Tribune from 2006 to its sad demise in 2011 – it was one of the first media victims of the recession. Because of Ireland’s obsession with United, I was sent over to Manchester an awful lot, and one of my first experiences of an Alex Ferguson press conference was two minutes of quotes which were – how to put this – ‘not for publication’. Through all that, I gradually got to know people involved who I stayed in a lot of touch with – and obviously still do.

As for favourite team, my mother is from Navarra in Spain, my father from Finglas and I grew up in Greystones, so I’ll say a mix of Osasuna, Shels and Bray!

We know journalists can come under serious pressure from editors and that United are notorious for staying quiet. It must be incredibly difficult to find and open contact with reliable sources?

It is undeniably one of those things “they don’t teach you in any university degree”. I have a BA in journalism and, although there were elements of the course I’d recommend, that certainly wasn’t in it. Part of it is undeniably a skill and, quite simply, some journalists are masters at it. A good contact can develop in any number of ways, from someone you suddenly find yourself in regular contact with to – and I appreciate some may laugh at this! – someone involved who genuinely likes a journalist’s work and will go to them. You often hear people complain ‘oh why would the club even want to tell journalists anything’. It’s not quite that simple. These are institutions with a lot of people involved and many openly snort at official club lines. To give an example, I know one journalist who became notable for a series of nailed-on exclusives at one club, and his primary source was a player’s dad, who he was friendly with.

Do you think having David Moyes as manager significantly affects the type of players United can attract?

To a certain degree, yes, but only because of the other side of it: United have lost one of the most legendary figures in the game and one of those people that any serious pro would think about working it. Ferguson also had famous powers of persuasion and convinced many potential signings to come to United on the strength of his argument, despite better money being available elsewhere. At the same time, that was by all accounts proving a little less significant in recent years, as more agents and buffers came into it, and United have missed out on a few. Ultimately, that shows the power of the super clubs. United, however, are a super club themselves so they will stay strong. They can offer the money and the prospects.

Like every profession, you will find good and bad. What’s the difference between a solid journalist and a shit one? Our readers have asked whether ‘all these journalists’ actually believe what they submit to the editor or if copies sold is priority.

For me, there have always been two main pillars to it: good writing and good contacts. The best combine both, as someone legendary like Hugh McIllvanney has done. Obviously, within that, there are other elements. Good writing, for example, involves style, insight, analysis, properly contextualising information, how often you agree with them – but also, whether you don’t agree with them but the strength of their writing at least makes you think. I think that’s key. What’s always in my mind when I’m writing something is what I’d actually like to read myself as a reader. As for journalists believing what they submit to the editor, well, yes I would say the vast majority all want to and hence try to do the job as genuinely and honestly as possible. While people go on about clicks/sales, most journalists only want them if it’s from something they have faith in. The job is ultimately about trying to get to the truth – or, at the very minimum, the best available version of the truth from the evidence that is out there. That, understandably, is where errors can be made as journalists try to get that evidence. But the vast majority are doing so with the most honest intentions.

Sent in via Full Time Devils – As a percentage – what ratio of transfer rumours circulating in the press about United, at any given time, have any foundation to them?

I would say almost all have *some foundation*. Contrary to beliefs, journalists don’t just invent things. Virtually every transfer story comes from someone, somewhere who is involved at some level. Obviously, from that, it’s then about cross-checking with other sources, how strong it is, how much you trust the source etc… but, also, I often think there can be a bit of a misunderstanding here. If a reported transfer doesn’t happen, it doesn’t mean the interest in the player wasn’t real. Journalists are not predicting transfers or saying what will definitely happen. They’re reporting the reality as it stands. And that is absolutely fundamental to the job and entirely legitimate. To flip it around, should journalists not have reported the fact that Ferguson showed Hazard around Old Trafford because they ultimately didn’t get him? Of course not.

The reason you will see so many names linked with United is because they will have drawn up a list of targets with first, second, third choices and so on, and will have been watching them. If a club seem to unrealistically be going for two players in the same position, it is often because they are trying to keep plates spinning and keep one deal alive if the other falls through. On the other side, of course, the media will get used too. Agents – and even clubs – will want to put stories out there to suit their agendas and make things happen for them. Again, they key is unravelling all these strands to find the thread of truth through it all.

Do you enjoy any Manchester United blog or fanzines?

I read a lot of club fanzines to try and get a proper vibe for a place as I do think that’s important. Sunderland’s ‘A Love Supreme’ is excellent but I don’t think there are many that compare to ‘United We Stand’. Andy Mitten is excellent and one of the great things about it is that they’re often features unconnected to football which provide superb reading.

You did most of your work in London this season. Favourite ground, hospitality wise?

Chelsea! No doubt. Pathetically, these are the things that concern journalists when they’re doing games: how difficult is it to get to, what’s the Wifi like, where’s the press box, what’s the food like. I must say, I still like a high press box. A lot of the current ones are too low. You want to get a proper perspective of a game. Old Trafford’s is quite nicely positioned. The food isn’t brilliant though.

Write as much as you can. Also, try to get onto your local beat, doing local stories and match reports. Unless you’re as gifted a writer as someone like Barney Ronay, no-one is going to make the jump to suddenly doing features on the Champions League. There has to be a steady progression. It’s also in such local stories that you first develop contacts you can trust. Desks will also respect you more if you’ve done it. Also, sub-editing shifts aren’t bad to get into places. Not only will you form proper relationships with those in an office, you’ll intuitively learn what works, what doesn’t, what a desk likes, what sharpens writing.

One response to “Interview with Miguel Delaney – Inside info, sources and covering United’s transfer front”