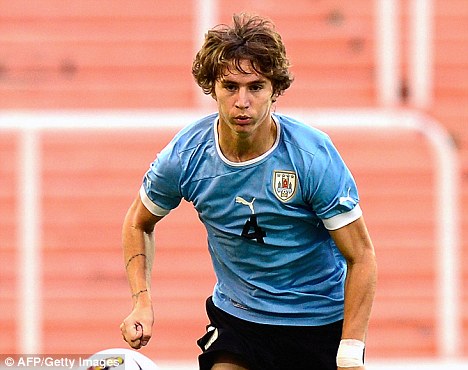 Peñarol’s club treasurer, Rodolfo Catino announced on Twitter that himself and Varela were making their way to England. The underlying message being that Peñarol, Manchester United and Guillermo Varela (20) had all agreed on a deal.

This claim was backed up by local Uruguyan journalists who reported that the fee would stand at €1.8million which could eventually rise to €2.8million depending on performances.

Varela and Catino were interviewed during Uruguayan radio program A lo Peñarol, where they both confirmed that the deal was in store.

“We have agreed during the negotiations,” said Catino. “Now we’re going to discuss a few other points. It looks like it will be a deal worth €2.8 million.”

Varela said: “I need to learn English. Catino has taught me a little. The setup [at Man United] is great.”

Late Thursday evening Catino confirmed that both were in Manchester.

“In Manchester awaiting the medical test tomorrow. Everything in order at the moment.”

Varela is described as an attacking right back who’s adventurous going forward. He backs this up by being a good defender as well. Despite his lack of physicality, he is energetic and tenacious in his game. After completing his transfer he will immediately join up with the Uruguayan national team as they prepare for the U-20 World Cup in Turkey later this month.

He attended a two-week trial at United prior to the move and impressed at what is now destined to become his new club.