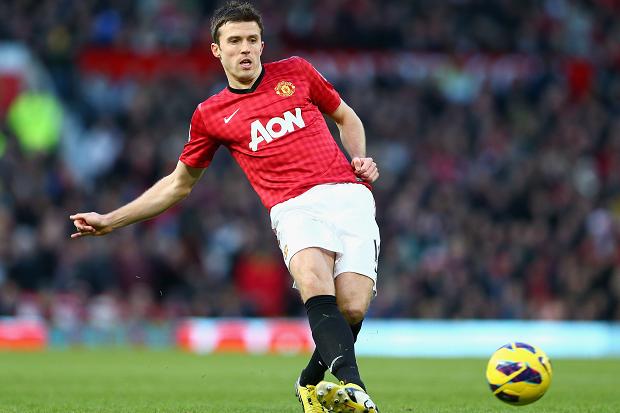 This is the second segment of SN’s three-part series, analyzing how Manchester United could line-up under David Moyes next season.

We will look at three aspects in this article (central midfield and defense and goalkeeper) and for the first part, please click on this link.

Before I rush into predicting the two likely central midfielders, it’s first important to understand how Moyes utilized his midfield personnel at Everton.

Moyes’ former side mainly played down the flanks with the target-man often forming daunting link-ups with the wing-men.

For this, the Scot liked midfielders with tidy ball distribution skills and ones also capable of providing defensive cover when the full-backs attacked. The partnership Darron Gibson and Leon Osman did an excellent job in this avenue last season.

Gibson was the field dictator, while Osman produced unnoticed and mercurial defensive showings. Although not a traditional “destroyer”, Osman still averaged an impressive 2.3 tackles and 2.2 interceptions per game.

Hence, in short, we can say that while Gibson sat just in front of the backline with the duty of getting the ball out of his team’s half and originating attacks, Osman, on the other hand, was more-or-less concerned with the pressing, winning possession in the center of the park and venturing into the final-third when required. Gibson was the deep-lying midfielder, while Osman operated as the “shuttler”.

For the deep-lying midfield role, (Gibson’s role), Moyes has Michael Carrick as a shoe-in.

The England international has mastered the art of ball-distribution and is a much better interceptor and tackler of the ball than Gibson. He can patiently sit in front of the back-four and be the defenders’ go-to man when they are looking for someone to get the ball out of the danger area.

On a more defensive front, Carrick can also be able to emphasize on closing down the space in between the lines if United get a “shuttler”  in the summer. The main problem that Carrick experienced last season was the lack of a facilitator. The likes of Tom Cleverley didn’t pressurize the opposition enough, leaving Carrick to do the pressing. This usually left United with no one to shut down the gaps in front of the back-four.

Even though Carrick admirably performed the multiple duties that he was tasked with, the Englishman’s job is not to win the possession and break up plays, but to just act as field general of the team, provide a shield to the defenders and next season, probably connect with Shinji Kagawa on a regular basis to form the necessary chain between the two ends of the pitch.

Even despite the defensive reliability of Carrick, Moyes will still need a box-to-box midfielder like Osman at United to assist the former West Ham United youngster.

The 50-year-old will need someone to press high up the pitch, win the ball quickly (and then look for Carrick to commence attacks) and venture into the attacking-third on a frequent basis.

As stated above, if United do buy a box-to-box midfielder this summer, he will unshackle Carrick from the unwarranted defensive duties.

As reports suggest, Kevin Strootman is set to sign for United, thus I choose him as the player to partner Carrick in Moyes’ two-man midfield pivot. 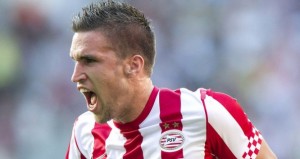 David De Gea is a shoe-in for this position. Although he’s still some light years away from being one of the top ‘keepers in the world, the Spaniard’s reflexes and shot-stopping abilities are arguably the best in England.

Moyes would, however, still want De Gea to put more emphasis on his aerial skills and physicality.

Nemanja Vidic might be haggled with fitness issues but he’s still the best defender at Old Trafford. The Serbia international’s physical presence and robust tackling make him the most pivotal piece of Moyes’ compact defensive structure for next season.

Rio Ferdinand might have got a contract extension, but I feel he will fall down the pecking order to be replaced by Jonny Evans as United’s second-choice center-back.

Evans is a neat tackler of the ball and his aerial abilities are also showing signs of improvement. The 24-year-old is also constant threat during set-pieces and it’s an open fact that Moyes likes defenders with an eye for goal during corners and free-kicks. Evans might lack the required pace and eventually find competition from Phil Jones and Chris Smalling as the season progresses, but as of now, the Northern Ireland international is the most likely partner for Vidic in central defense.

However, since he’s replacing Ferdinand in the United line-up, Evans will also have to take the onus of playing the ball out from the back.

Last term, Ferdinand often used to venture into the opposition’s half to make crucial long passes directed towards the final third.With a 90% passing rate and an average pass covering 23 meters (highest among all outfield players at Stretford End), Ferdinand ensured United’s attacks were calmly set up. 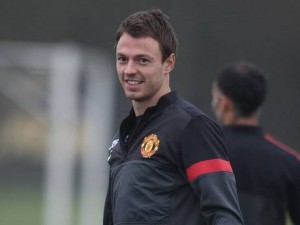 Evans on the other hand might be learning this trade in an impressive fashion as he showcases a remarkable 89% passing rate, but the newly-married star will need to be more risky and direct with his distribution since his average pass length is relatively less than Ferdinand (20 meters).

As we conclude this topic, one has note with the plethora of defensive talents available, Moyes could be seen rotating his centre-backs thoroughly throughout the course of the season.

The final part will look at the club’s wing options.