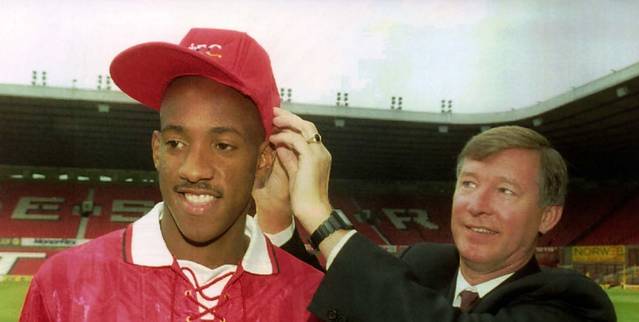 Short and sweet, without Dion Dublin’s broken leg Manchester United would never have been graced with Eric Cantona – at least that’s what he says. The upbeat Englishman may not have had the most impressive career with United, but he certainly had the promise to do so. It would be wrong to sit here and indicate that Dublin could have captivated United the way Cantona did, but nonetheless his presence (or lack thereof) was felt. As he suffered a broken leg in just his second appearance, “The King” was able to take the first team by storm – and from there United have never looked back. Amassing only 12 appearances for the club, Dion Dublin to this day with a glimmer in his eye admits jokingly that he is the reason for United’s trophies over the years as Cantona undoubtedly made United a desirable club to join due to it’s success.

Was his career in jeopardy after breaking his leg in only his second appearance? Without question – but Dublin did not fear for his career after suffering the injury set-back. Instead, he struggled with the fact that there was no way back after Cantona joined the ranks due to his instant attacking prowess. The Frenchman was United’s savior as he tallied 82 goals in 185 appearances for the Red Devils. Simply put, Cantona was United’s engine that fueled their drive for perfection. With a popped collar and the devilish sneer, Eric Cantona took over the hearts of Sir Alex Ferguson and Manchester United supporters worldwide – especially with that brilliant chip against Sunderland, I know I’ll never forget that moment.

Now back to Dublin, whom spoke with ESPN Classic awhile back and told them: “I am the reason why Man United have won all those trophies – it is down to me, it really is. I break my leg and then they bring in this has-been called Cantona who just takes the world of football by storm.” Although he certainly is not the most remembered because of the simple fact of his length of stay, the most endearing of United supporters understand his importance. Players like Dublin are what makes United a unique club: full of promise, history, and the overarching understanding that the team comes first. It almost comes without saying that injuries are never a desired way for a players career to end at a certain club; however, Dublin had his silver lining as he did not end his professional career until 2008. After being released by United he went on to a successful career at Coventry City and Aston Villa before concluding his playing days with Norwich City.

The man still even considers himself a Red as he often refers to himself as “we” in regards to both he and his former club. Of course no one is going to forget his Premier League Golden Boot in 1997/98, but his story proves there is more to life beyond football. Away from football he has quickly become an accomplished amateur percussionist and even invented a new instrument in which he named “The Dube.” With a brilliant football mind and a even brighter sense of humor, Dion Dublin is a true mastermind in terms of being an ambassador for the world’s most beautiful game. Personally, if I look back at some of my all time greats at United both from a personal and impact standpoint – I’d for certain place Dion Dublin within the top 10 simply because of his dedication to the world of football – and more importantly to the beloved club, Manchester United.

More importantly, to this day Dion Dublin offers fans with that extra bit of comedic relief that allows Manchester United to move forward. Mistakes and injuries are bound to happen in football but it’s about the moves after, the replacements and the success stories which thrive afterwards. His warm mentality to this day embodies United: a club dedicated to individual players successes while at the same time remaining dedicated to the development of a team atmosphere. Even more so, what a jokester right? In a way Dublin is right, not in the sense of the enormous trophy cabinet that Sir Alex Ferguson has instead, in terms of bringing The King to Old Trafford.