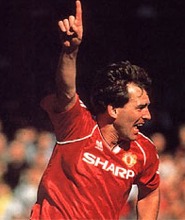 From what I’ve seen and what I’ve been told, “There is only one, Bryan Robson.” The once Manchester United man, turned Global Ambassador for the club has remained loyal to the club for the past 30 or so years. As he made way to United in 1981 for a fee of £1.5 million (a record at the time) supporters immediately fell in love with his work rate and passion. Amassing 461 appearances and 99 goals during his time with United, his 13 year career (1981-1994) was astonishing. To go along with his brilliant professional career at United, he also took home 2 Premier League titles, 3 FA Cup’s, 1 Football League Cup, 3 FA Charity Shields, 1 UEFA Cup Winners’ Cup, and 1 UEFA Super Cup – quite impressive.

As a committed, talented and strong midfielder – he was United’s backbone for many years both on the pitch and off. Robson was able to conjure up energy in his squad like no other through his end to end style of play. One moment you’d catch the workaholic in his own end defending from an onslaught, and immediately after the clearance he’d be 70 yards up the pitch delivering the vital cross leading to a goal. Upon joining United, Bryan Robson stated “money wasn’t my main motivation. I simply wanted to be a winner.” Within a now monetary-based footballing world where players like Falcao, Cristiano Ronaldo and nearly every other world-class footballer is receiving over £30 million, Robson wanted to be a winner. Nowadays players like Ronaldo receive these ludicrous contracts come to find out a year late, they are “unhappy.” As we’ve come to see, money does not buy happiness and certainly money is not the solution to long-term success in terms of trophies – er, hello City.

A monumental player for both England and Manchester United, he stole the hearts of nearly everyone who watched him on the pitch. As he made his first appearance with the coveted number 7 that George Best wore before him, Robson made it his own. Robbo did not try to emulate the play of Best as those two were completely different players, instead he used his terrific football brain to tear defenses apart. Robson’s passion shrined through as he drove past defenders all across Europe making him seen as a football God, amongst men.

Captain Marvel as he is often referred to as, lead Manchester United to loads of success as stated above. Even as his career came to an end nearly a decade ago, in 2002 he was an Inaugural Inductee into the English Football Hall of Fame, an award that again comes to no surprise for the everyday United supporter. More importantly, when Ron Atkinson initially brought the Englishman to Old Trafford he knew what he was getting: “With this player you’re not taking a gamble, what you’re buying is pure gold.” Atkinson had plenty of years to see his signing turn into that gold before Sir Alex Ferguson took over and continued to aid in the development of one of the United greats. And although he proved himself to Atkinson, Fergie offered a similar sense for the lads to prove their worth to him as well as Robson recanted: “He came to the top of the stairs and just said ‘Everybody starts from scratch. You’ve all got an opportunity to prove your worth to me’. That was it.” Even as he was courted for Juventus for quite some time, he remained loyal and signed an additional seven year contract with Manchester United – an admirable decision to say the least.

The loyalty that Robson showed Manchester United was absolutely stunning, and was the reason why fans worshipped him. Although I was never able to experience it first hand, the highlights and videos I’ve come across of chants ringing “there is only one, Bryan Robson” as it echoed throughout Old Trafford, blows my mind. To this day, we throw ourselves at him to get his autograph or to take a picture because he is arguably one of the best to ever thrown on a Red jersey. For those of us who never had the chance to watch him play live because we were too young, it’s a shame; however, we continue to live on through the memories from the elder Manchester United supporters – history continues. A true gentleman to meet as I was lucky enough to speak with him for a brief few moments back in October, I can honestly say there will ever be only one Bryan Robson – our eternal Captain Marvel.

By Far The Greatest Team have exclusively interviewed Denis Irwin. His thoughts on Keane, signing for United and winning the Cup Winners’ Cup make an interesting read.

2 responses to “There is only one, Bryan Robson”