Even with the arrival of a new manager after a gap of more than 26 years, there’s a general consensus among the Old Trafford faithful and the football pundits that Manchester United will continue with almost the same tactical philosophies that were employed during Sir Alex Ferguson’s era.

David Moyes is often considered the tactical twin of Fergie, as like his predecessor, the 50-year-old is a strong advocate of wing-play and the ‘outdated’ 4-4-1-1 formation. Although the two’s tactics might look the same on the paper, on-field they vary immensely.

Hence, we present you with the first chapter of a three-part series analyzing Moyes’ potential starting XI at United next season.

(Note: For better understanding, we’ll go in a reverse order, with the first segment looking at just the attackers)

As a result, the Toffees averaged 64 long balls per-game last term (3rd highest in the league) since most of their attacks were built on a long pass being played out to Fellaini, who would subsequently hold on to the ball until his teammates surged forward.

At United, however, Moyes will likely have to make do without a target man unless he decides to heavily reshuffle the squad, which is as likely as Liverpool winning the Champions League in the distant future.

Robin van Persie is clearly not a target man, while both of United’s No 10s (Shinji Kagawa and Wayne Rooney) can’t win aerial challenges and hold up to the ball like Fellaini or Tim Cahill.

Hence, the most notable tactic that one could expect under Moyes is for United to play more balls on the ground rather than in air.

For this reason, I pick Kagawa as our first-choice centre-forward under the Scot.

The Japan international is a technically gifted player and his mobility easily allows him to easily drift on to the wings to provide support to the flank-men and create 3-versus-2 situations.

Kagawa can form the necessary nexus between the midfield and the attack as he likes venture all over the field to receive the ball and then distribute it effectively in the final third (as can be seen from the following two following pass graphs from United’s 1-0 win over Sunderland more than two months ago). 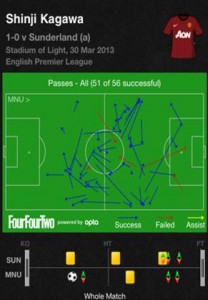 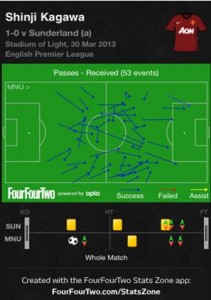 Not to forget, Moyes liked his Everton side to make attacking transitions in a very direct and fast manner, testament from the fact the Merseysiders made the highest proportion of forward passes in the yesteryear domestic campaign (33%).

Thus, this gives another reason to start Kagawa ‘in the hole’ as his vision, speed and passing can quickly transform the team into an attacking unit. Moreover, the 23-year-old flourished in a same kind of set-up at Borussia Dortmund.

Rooney on the other hand, is more of a field-dictator and a direct goal-scoring threat. He likes to drop deep, distribute the ball to the wings and then make late runs into the box. His pace is waning and the 27-year-old can’t carry the team on the break in the same manner as Kagawa. Added to that, Rooney’s future at Old Trafford is far from settled right now.

For the striker role, Robin van Persie is a shoe-in. He’s currently the best poacher at United and Moyes will surely make plans to ensure that United play to the flying Dutchman’s strengths next term.

Look out for the next chapter which will analyze the central midfielders, goalkeeper and central defenders.