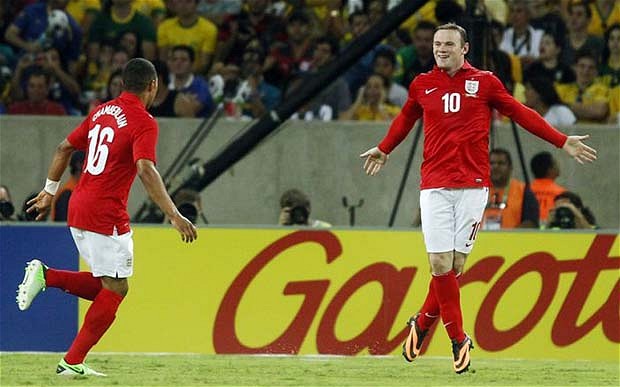 Roy Hodgson’s men huffed and puffed to pull out an unexpected 2-2 draw against 2014 World Cup hosts and favorites, Brazil on Sunday.

After a relatively lackluster first-half, the game came to life in the 57th minute when 29-year-old Fred scored an easy tap-in to give the home-side a deserving lead.

The Three Lions bounced back in impressive fashion with two quick-fire strikes by Alex-Oxlade Chamberlain and Wayne Rooney, before Paulinho equalized for Brazil eight minutes before the clock struck ninety.

SN looks at how the Manchester United players involved in the relatively dull friendly game fared.

Due to Brazil’s attackers versatile positioning, Carrick didn’t specifically mark a target, nor was he told to press and win the ball, but his job was only to narrow down the gap between the midfield and the backline.

The 31-year-old also had the onus to get the ball out of defense.

Although he did make some good forward passes, his attacking teammates usually failed to build on to that momentum. Moreover, on several occasions Carrick himself looked unsure of his passing moves as the former Spurs midfielder was constantly haggled and pressurized by the opposing strikers (particularly Neymar). On the other hand, the former ‘Hammer’ rarely ventured forward, but looked susceptible against the pace of Brazilian attackers during breaks.

Carrick typically played the “Makelele role” on Sunday, however, he somewhat struggled to cope with the pressing, while his lack of pace was also a concern sometimes.

Early on in the game, Jones could be seen marking and pressing Luiz Gustavo. However, the youngster’s pressing was such that he just moved slightly higher up the pitch and didn’t really try to win the ball, allowing Gustavo to easily dictate the game from the deep.

Moreover, due to Jones venturing into Brazil’s half while pressing Gustavo and Theo Walcott usually caught high up the pitch, England often had a massive gap in-front of Glen Johnson, around their right wing.

Jones’ passing was also far from impressive, while the 21-year-old could have done better in closing down on Hernanes when the latter took the shot that eventually led to Fred’s goal.

After AOC’s arrival, Jones shifted out to the right-back role.

Wayne Rooney
Wayne Rooney was nonexistent in the first-half but was arguably England’s biggest influence after the interval.

He dropped deep, tried to link up with James Milner and Walcott on flanks and set up two wonderful plays near Brazil’s penalty area, with one them leading to Chamberlain’s goal.

Not to forget, the 27-year-old scored an excellent long-range strike after a driving run from the left flank.

The Arsenal transfer-target lacked the supply of ammunition for most part of the game and since he was England’s lone striker on the pitch, Rooney couldn’t fall back as regularly as he would have liked to.

Frankly, if Hodgson is preparing his team for next year’s World Cup, best is to play Rooney as a second-striker. The former Everton youngster excels when given the freedom to drop deep and the first 45-minutes yesterday clearly showed how he is not adept at playing as the lone striker.