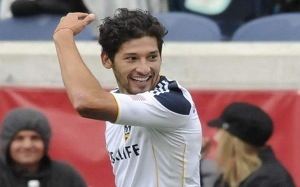 As an American supporter of Manchester United, I’ve always dreamed of a true mainstay in the ranks. Yes, Tim Howard had a fairly successful career at Old Trafford, but we see it as a common occurrence that an American goalkeeper finds his way to the Premier League. However, I am left wanting more – a field player to steal the hearts not just of the Yanks, but also those local Manchester United supporters who’ve put their hard earned money, countless hours and practically grew up at Old Trafford to fall in love with this footballer.

I desperately want an American to burst into the first team, revolutionise his position at the club, and to go down as a United man, through and through. In the end, what I do not want is for this American to be seen as, an American. I want the Stretford End to praise his name, David Moyes (or any other future manager) to write his name first on the team sheet every week, and lastly to be seen as a true footballer in every essence of the word. It would be impossible to sit here right now and dictate who exactly that American will be, yet I have a pretty good sense of what type of player he needs to be to survive at one of the most historic clubs in arguably the most grueling league in the world.

Naturally, I’d like to think an American defender would fit the criteria at Manchester United as both physicality and strength on the ball are a must in the Premier League. In turn, immediate thoughts rush into my mind about one Mexican, American dual citizen whom towers 6 feet 5 inches tall and was named MLS Rookie of the Year in 2009 – Omar Gonzalez. Gonzalez is young and full of raw talent as he uses his height to his advantage in the MLS for his current side the LA Galaxy. For the past 3 seasons, the defender has clearly been the MLS’s best defender and in under 10 US Men’s National Team appearances, he’s already considered one for the future.

I understand, another American defender at Old Trafford? Jonathan Spector made just three appearances in three years and was anything but special for United, but Gonzalez is different. For one, Gonzalez isn’t being thrown right into the Premier League with some of the best in the business just yet, and already displays the characteristics of a long-term defensive influence in both America and hopefully abroad. At 24, his inexperience shows at times which unfortunately has cost both the Galaxy and the senior United States squad to falter. With “faltering” factored into the football equation, Gonzalez may fit the bill at Old Trafford just fine. And although the comparison to the “next United great” may be a bit far-fetched, it never hurt anyone to dream.

There’s no telling what the future holds for Omar Gonzalez; however, the tough mannered defender may find his way to Manchester one day – I hope. As Rene Meulensteen has departed his first team position with United, the philosophy remains in place that United search for creative players who can dominate individual battles. The MLS is certainly on the rise, but in order for the American to bring his game to the next level a move to England may serve him best. There is no question that Gonzalez can dominate play from his own half and provides the added strength to the attack. The positive attitude he puts forward in his approach to every match is nothing short of stellar and his unique focus on and off the ball has become increasingly better as noted against Mexico at the Azteca.

A true anchor at the heart of any defense, Gonzalez is quickly making a name for himself as the best defender in North America. As he is constantly called upon in World Cup Qualifiers and continues to dominate with his aerial prowess, adding another young defender to the United ranks could be just what the doctor ordered. United already have plenty of talent in their squad with Jonny Evans, Chris Smalling, Phil Jones, Alexander Buttner, Rafael and Fabio da Silva. So the next question, where does Gonzalez fit in this back four with the aforementioned six youngsters, Patrice Evra and the two current central-defenders? As Buttner may be a replacement for Evra, and Evans being able to function as an outside back, that would leave space for Gonzalez in the middle. A bit confused? In better terms the United back four would feature Jonny Evans, Chris Smalling, Omar Gonzalez, Alexander Buttner. The theoretical race would thus be between Evans, Smalling and Gonzalez as I eventually see Jones falling into a deep lying midfield role while Rafael allows his Brazilian flare to develop along the right wing.

Gonzalez was introduced to the European way in a fashion that most do for their first time – a step behind, mistakes a plenty, and flat on his backside. Rarely beaten in the air, the young American was caught a few times too slow in his recovery thus leading to the first goal of the match in which Kevin Mirallas perfectly chipped Tim Howard. Second, the 24-year-old was caught in possession in his own box late in the second half which resulted in a simple finish by Christian Benteke. Quickly, the young American defender who’s only been capped seven times by his country found out what it is like to play against some of the best in the business. In the European and international game of football, it comes down to maximizing on your chances, and minimizing your opponents – something that Gonzalez struggled with on the night. Yet we reiterate the point – seven caps. Despite the errors, Gonzalez never shied away from a challenge as he man marked the Fellaini on nearly every set piece and kept a close eye on his upon every entry into the penalty area. His speed of thought on the ball especially for not playing against the European based model was quite impressive, which could lead us to believe that Gonzalez could be quick to adapt to any situation he may be thrown into.

All’s well and good David Moyes, so is it time to sign him up? If Gonzalez were to join tomorrow he certainly wouldn’t be anywhere near close to becoming a starter, but given the opportunity to develop under the likes of Rio Ferdinand and Nemanja Vidic would pay dividends in the long run for the American. Is he ready to join Manchester United this summer? Absolutely not and I wouldn’t suspect that he would even enter the Premier League until another two to three seasons. Growing pains come along with any player and although many think so highly of his talents, he is not in the same world-class category as a John Terry or even a Rio Ferdinand. But that does not mean he cannot work his way into that same category one day. As a defender seems to the United States’ only constant lately, he seems one of the best at learning from little moments in matches and making his weaknesses, his strengths. His physicality has been tested by Romelu Lukaku and Christian Benteke – and he held his own. Although rarely beaten in the air, I cannot help but wonder if he can handle 1v1 battles with Oscar, or even Theo Walcott.

Without a doubt, there are plenty of learning moments ahead for Omar Gonzalez. At 24, he seems to be learning at a much faster rate than his comrades as he constantly adapts his play throughout the entirety of a match. As all of America would love for a player of Gonzalez’s caliber to retain a spot in Manchester United’s starting XI, that time may be in the distant future. Time will tell when it comes to the future of an American field player at Old Trafford but at the current moment, a move for Gonzalez is the most promising in my eyes.