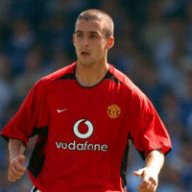 Paul Tierney is an English-born Irish footballer who came through the youth ranks at Manchester United.

Instead of breaking into the first team, Tierney spent time on loan with Crewe Alexandra, Colchester and Bradford. He last played for Altrincham in 2009. His brother Marc is also a professional footballer currently playing at Norwich.

Lonely Tourist have released a nice song about the former United player, who you can now follow on Twitter – @tierney39.