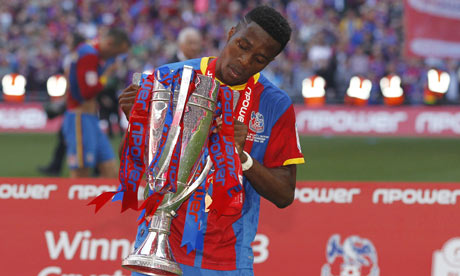 If onlookers casting their judgemental gaze, sharpening their knives thought United’s latest signing Wilfried Zaha would buckle and wilt under the significant pressure that has recently transcended over his fledgling career got a steep dose of reality and witnessed some of the great potential Zaha possesses on the biggest stage – the richest game in football.

The 20 year old, born in the Ivory Coast but moved to England with his parents at the age of 4, was the cornerstone behind Crystal Palace’s playoff final victory over Watford on Monday. Zaha, who has already been capped by England, won the decisive penalty which turned out to be the critical moment of the match. Zaha wreaked havoc throughout the match, the star man on paper took this hefty and deserving tag out onto the home of football and gave our fans and David Moyes several positive glimpses of his undoubted talent.

As touched upon in the first paragraph, Zaha has encountered burdens that could shoot others down from a mental viewpoint. The winger will go down in the history books as the great Sir Alex Ferguson’s final ever purchase as a football manager, something that will always be thrown in his direction once he adorns the red shirt of Manchester United. Recently publicised rumours linking Zaha to gang related incidents in the London area true or not casted doubts over Zaha’s life outside of football and whether he had a steadying influence in his life or was cut out for life at the highest level with the newly elected champions.

If history has taught us anything, it’s that outside influences and factors are cast aside and are judged with a blind eye as long as the man is delivering once he crosses the white line, giving his all for the shirt and showing unconditional commitment to the cause. Misdemeanours are quickly ignored as we have seen over the years with Cantona, Rooney and others once top quality performances are in vast supply. Zaha’s life outside football will be on the back burner as far as United fans are concerned if he hits the ground running and shows early promise that the price tag will be fully justified.

So what will Zaha bring to a squad full to the brim of natural gift, winning mentality and fortitude?

Well, as was painstakingly excruciating to endure last season, our wingers did not perform to the best of their abilities- the widemen triumvirate of Ashley Young, Nani and Antonio Valencia did not scale the footballing heights they achieved in the 2011-12 season. The trio’s progress in the last campaign was truncated by injury and loss of form, with the evergreen Ryan Giggs reverting back to the wing he made his own after his conversion to central midfield a couple of years back, something the Welshman would not have done necessarily if the wingers had performed to the levels we all aspire them to and know they are capable of.

The indictment of the wingers’ plight was emphasised further by many predicting that Zaha would comfortably stroll into our starting eleven whilst Ashley Young was grimacing on crutches, Nani was shown red against Real Madrid and stricken by injury and Antonio Valencia striving and ultimately failing to rediscover his menacing form.

Zaha showed against Watford that he has the quality required to go a long way to winning over United fans who may still be skeptical over the move. Zaha’s striking and standout qualities were clear for all to see: he has pace to burn, he is not lacking in self-confidence which enables him to play in such a carefree manner and makes him a literal direct force to opponent’s defences. Although Zaha sometimes turns down blind avenues and into traffic, it is just a rough edge that can easily be sanded off when surrounded by a better standard of player, no disrespect to Crystal Palace of course.

Zaha is very adept at bambozzling his defensive counterparts, he possesses a vast array of tricks in his box of flair, exemplified by the dazzling skill which left his marker for dead who could only subsequently bring him down to decide the game.

However, it is not just Zaha’s scintillating and mercurial pyrotechnics that make him a potential star of the future. Although we can easily get ahead of ourselves when passing judgement over a footballing protege, Zaha has undoubted potential and the thought of the young winger flourishing and maturing further under the tutelage of proven stars and experienced professionals such as Van Persie and Giggs can only accelerate the learning and transition processes.

Zaha has come from humble backgrounds and appears to be a very thankful and level-headed individual and once he settles down and acclimatises to his new surroundings and team-mates, the modest transfer fee in today’s extortionate transfer climate will appear to be even more of a bargain than first appears.

All the best to Wilfried Zaha, his future looks bright. Here’s to a long and prosperous career at the Theatre of Dreams.