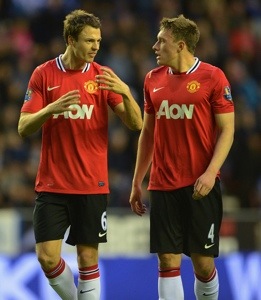 Nearly 500 appearances for Manchester United and a combined age of 65, current center backs of Nemanja Vidic and Rio Ferdinand may have a few more years left in their footballing legs before a real changing of the guard occurs to the defensive unit. Old Trafford has been graced with two solid defensive performers over the past decade or so, but as injuries and lack of full fitness come into question at times – United seem to already have their defensive replacements in Phil Jones and Jonny Evans. At 31 and 34, Vidic and Ferdinand both have offered Sir Alex Ferguson stability and of course, a few Premier League titles as well; however as up and coming youngsters infiltrate the Red Devils starting XI their time may be quickly coming to an end.

Now, United have youth on their side with Jones and Evans at Moyes’ exposure, who may indeed throw the pair onto the pitch to see their potential partnership. Even though Ferdinand has recently signed an additional one year contract and Vidic remains the United captain, Moyes may be best suited to rest the veterans a bit more when necessary and allow more responsibility to flow through Evans and Jones whom both have similar qualities to the current center-backs.

We begin with the 21-year-old Englishman, Phil Jones. The Preston native is primarily a defender, but can also be used as a defensive midfielder as Sir Alex had in most recent times. As Jones continues to break into the starting XI his career could benefit greatly if David Moyes employs him in a defensive midfield position, for the time being. A strong and powerful defender in many ways emulates another natural born leader and captain, Vidic. And with only 46 appearances made for United to date, he can only continue to improve his footballing knowledge with additional exposure in the first team. Certainly for the time being, one cannot question his commitment and natural leadership on the pitch as he has recently been rewarded for his efforts by making his England senior squad debut in October 2011 and even been given the tough task of the Real Madrid outfit in the Champions League this past season – which he did quite well, mind you.

At only 21, it is important that Jones does not try and emulate Vidic or Ferdinand but rather create his own style and play within his limits. Both of the current mainstays with United have established themselves through numerous trials and tribulations with the Red Devils and certainly offer a spring board to players like Jones who one day will look to retain those vacant positions. As a sound defender whom lacks positional senses, could feature for United this upcoming term in the midfield allowing him to work on that positional play in which he’s been lacking. An important part of being a defender is not only to tackle well as head the ball with venom, but also to get the ball on the ground and build the attack from the back. Part of Phil Jones’ game is his unique ability to attack which seems only natural to him which further contributes to his versatility to Manchester United moving forward. This new role (defensive midfield) he could take over would pay dividends in the long run for the youngster, allowing him to flourish as a jack of all trades much like John O’Shea during his prime. Although he may be earmarked as a future captain contender if he upholds a high level of play with United, we must allow the youngster to grow and develop his own skill-set and just hope he graces Red Devils supporters with brilliant memories to come.

Shifting our attention on a replacement for Rio Ferdinand (when the time comes), is that of Jonny Evans. The 25-year-old joined Manchester United back in 2006 did not immediately feature in Sir Alex Ferguson’s starting XI as he was sent out on loan spells to United’s feeder club Royal Antwerp, and then Sunderland. During his beginning years with the club, his mistakes were magnified and it seemed as a regular occurrence that Sir Alex was crewing him a new one on the touchline – but those moments have been few and far between in recent years. The once quiet defender has quickly turned his play into a fairly calm individual who easily retains the ball under pressure and seems to have loads of confidence with the ball at his feet. As Evans slowly regained both the manager and supporters trust, he’s remained a confident presence when called upon.

Evans finally made a name for himself in Europe during the 2010-11 season as he became a regular alongside Vidic in the center of defense in the absence of Ferdinand due to injury. Nearly 96 appearances later and even tallying three goals of his own this term, he seems to be riding the underrated train quite readily. As Vidic and Ferdinand continue to start over him, he may have had his best season yet under the tutelage of Sir Alex Ferguson and the seasoned veterans. However, his youth still is quite apparent as the Northern Irishman recently punched West Brom’s Markus Rosenberg in the face in their recent 5-5 draw (no FA action as a result). Often his play goes unnoticed much like Michael Carrick, but in the grand scheme of things, he’s a brilliant footballer with a even brighter future ahead. Evans even expressed his increase of comfortability at United (via The Express) “In a short period of time, you gain that respect from your teammates and the confidence to say something that needs to be said.” Whilst Evans works on his leadership in terms of becoming a defensive juggernaut with the Red Devils, United’s 20th Premier League title has made him hungry for more success. With the added motivation to secure a starting XI spot under the new manager, Moyes, the determination is readily found in his play.

The long and short of the center-back debate is simple – why break something that is not broken. Both Ferdinand and Vidic have been performing through there skin, especially in the build up to their record 20th Premier League title, but while those two veterans remain at the club it would not be a bad idea to introduce Jones and Evans into their future roles. Creating a partnership from the early going may allow for an even greater influx of Premier League, domestic and European crowns to head to Old Trafford.