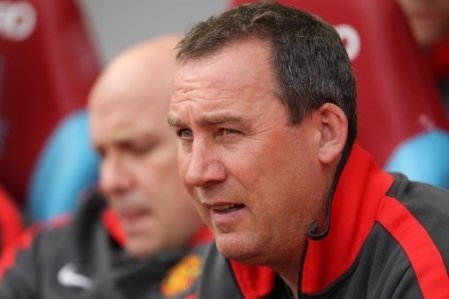 As Paul Scholes and Sir Alex Ferguson have stepped away from their posts at Manchester United, both the remaining squad members and managerial staff must continue to make United a unique football haven for some of the best talents in the world. In order to continue with the success that the Old Trafford have found so readily in their football history, Rene Meulensteen the first team Skills Development Coach must trek onwards and train both old and new members of United with the same venom he has done since his appointment to the first team by Sir Alex back in 2007. The 49-year-old Dutchman has over the past six seasons has injected life into their training sessions at Carrington whether it be working individually with his fellow countryman Robin van Persie, or more positional play with Antonio Valencia and Patrice Evra.

Known as Ferguson’s “right hand man” Meulensteen initially joined Manchester United as the Skills Development Coach in 2001 involving the younger players at the club up until age 21. Yet with his unique success and drive with the youngsters, Sir Alex graciously promoted the Dutchman – and the rest is history. Although nearly all credit goes to Sir Alex for bringing in world class players such as Cristiano Ronaldo, Nani and RVP to the club, it has been Meulensteen who has worked with every member he’s come into contact with and provided each with his own special techniques in order to make each player succeed with their own personal skill-set. The 49-year-old worked with Cristiano Ronaldo back in the 2007/08 season in which he helped Ronaldo to perfect both his dribbling and shooting techniques which translated into 42 goals that season. One of the sole reasons why Ronaldo was so successful that season was not only because of his natural talent, but because of Meulensteen’s strict training procedures of showing Ronaldo the correct moments to dribble and shoot thus further enabling him to be elusive to nearly every defender that stepped his way while also keeping defenders honest with his rocket of a shot.

Even this season, Robin van Persie has been one of the most vocal supporters to Meulensteen’s training methods as he told reporters (via Mail Online):

“I have a lot of good trainers, but it’s the way he prepares our teams for games. Every match is different, so every training session in the build-up to games is unique […] My goal against Wigan, when I cut the ball inside and shot with my right foot. Again this situation, we trained on.”

Meulensteen’s ability to work with the entire squad as a cohesive unit, while also remaining to pinpoint certain aspects that are necessary for improvement within individual players is nothing short but spectacular. The naturally gifted players of Ronaldo and Nani were not the only success stories that may appear on Meulenstee’s resume – Ryan Giggs and Ruud van Nistelrooy are also proud supporters of his work. With his incredible attention to detail in all training sessions at Carrington, Meulensteen brings a proven, and winning training curriculum to United which certainly has proved dividends in the last seven seasons. However, the tides may be turning as David Moyes has been appointed the successor to Sir Alex Ferguson leaving the future of Meulensteen’s career with the club, in question (via The Sun):

“I don’t know how things are going to turn out. I have an ongoing contract. But United and I agreed to hold a brainstorming session about my role whenever Alex Ferguson stopped being manager. Things should be clearer over the next few weeks.”

Although the Skills Development Coach may fear that Moyes may send him packing, I would be hard-pressed to say that the likes of Giggs, RVP, Valencia, Kagawa and the rest of the squad would indicate their comfortability with Meulensteen’s training methods. Moyes may certainly have a few assistants and coaches on his mind to accompany him at Old Trafford, the current first team coach pays incredible attention to detail as indicated by some of the United greats.

According to his academy in which he overlooks – his vision for Manchester United is a simple one: “the team with the most creative players and players who can dominated the 1vs1 situations all over the field will be the most successful team in the world.” He also pays special attention to members of United with a unique focus on off the ball movement but at the same time stressing the importance of the mastery of core footballing skills such as training consistently with a players weaker foot. During a relatively short period of time, Rene Meulensteen has put in place a good working environment which promotes the close-knit United community contributing to one of the most elementary rules in sport – practice the way you want to play. As Meulensteen brings his players back to the rudimentary footballing principles, he can then promote his keys to both physical and mental toughness “Attitude, Behavior, Communication, Discipline, Enthusiasm, Fair Play, and Goals.”

One response to “The impact of Rene Meulensteen at United”