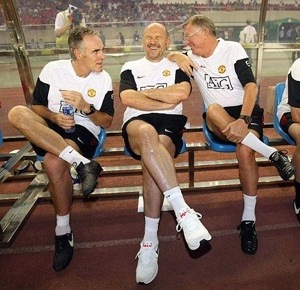 David Moyes will look to bring in some members of his own backroom staff at the expense of Mike Phelan and Eric Steele.

Chris Wood, goalkeeping coach at Everton and America’s national team, is tipped to replace Steele. He has been Goodison Park since 1998 when initially appointed under his ex-Rangers boss Walter Smith but continued in the role under David Moyes.

If it’s true about Steele losing his job there will be a feeling of loss. Not only did he learn Spanish to work closer with David de Gea and do a sterling job with his development, but he worked brilliantly with Edwin van Der Sar.

Mike Phelan is also reported to have left the club today as assistant manager. I personally felt throughout his time as Sir Alex Ferguson’s right hand man fans criticised him without knowing what he actually does. The players were close to Phelan, therefore enjoyed working closely with him. A yes-man or not, a friendly working relationship is important.

Who will replace Phelan as assistant manager? That’s a question I wouldn’t be brave enough to answer at the moment in time. Phil Neville and Ryan Giggs have both had their names mentioned with the latter acting as a player at the same time. Whatever happens, though, Moyes will go with whatever he feels will work. That may come across as slightly obvious but when the news came through this morning that Phelan and Steele would be shown the door, fans began questioning the new manager when his contract had not even started yet.

Any staff member who happens to leave the club in the coming weeks as a result of management change will be a loss. The group from squad to staff is settled and comfortable. Clubs without that run into difficulties.

One response to “Mike Phelan and Eric Steele set to depart”