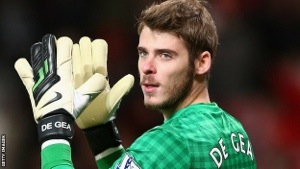 David de Gea insists he is not thinking about a move away from Old Trafford despite speculation that he misses Spain.

The Spaniard took time to settle in England following his arrival from Atletico Madrid where he spent eight years. Ever since, he has established himself as not only number one at United but in the Premier League also.

Speculation grew when it became clear that Victor Valdes wanted a move from Barcelona this summer. And fans of the Catalonian giants voted de Gea as their main target in a poll via El Mundo Deportivo.

Meanwhile, De Gea will no longer be working with goalkeeper coach Eric Steele. Both had a very close working relationship, but on the bright side our number one was selected in the Spain squad for June’s U-21 European Championship in Israel.