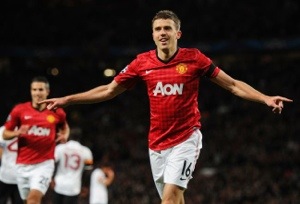 Without question, Robin van Persie made a huge impact in his first year at Old Trafford with another 20+ goal season and another Golden Boot Award in the Premier League, but let us not overlook the impact of Michael Carrick. As he began his career with West Ham United before moving to Tottenham in 2004, Carrick was able to make a name for himself with his defensive duties before heading to the historic stomping grounds of Manchester United. Around seven years ago, the Englishman entered Sir Alex Ferguson’s squad on the back of Roy Keane’s exit; however, his arrival was not all flowers and roses – but since then he has never looked back.

After United secured Carrick’s signature in 2006 for £18 million, three years later he found himself stranded on the bench as Sir Alex Ferguson favored Paul Scholes over the newly acquired Carrick. However, the English midfielder a year later found his footing in Ferguson’s squad in the 2010/11 season as he featured in 11 of United’s 13 Champions League matches – largely attributed to his increase of intensity in the center of the park and also because of the retirement of Paul Scholes. Upon Scholes’ un-retirement not long after, Carrick had already begun to thrive in his newly found opportunity as a regular starter. The confidence that was injected through his veins allowed for the continuation of his mainstay in the starting XI even after Scholes reinstated himself back into the Premier League.

As the former United captain Keane departed, Carrick was suppose to be the immediate replacement in the midfield, even taking over the same number, 16. The highly sought after midfielder was largely touted as being inventive with his distribution, but also maintaining the ability to provide support to the defensive unit. Over the years, his intense hunger has driven the United squad into greatness and constant stability. Former Spurs boss Martin Jol even indicated back in 2007 the ability of his former player “Michael’s biggest quality is to move play from defense to attack and win the ball. Because of him, other players play better.” From a distance, it may seem that Carrick may be strolling along the park; however his read for the game gives him a leg-up over the opposition as he constantly picks off passes creating numerous counter-attack opportunities. A deceptively intelligent player for United has given rise to one of the most underrated footballers throughout Europe.

Jol’s convictions have been spot on, as he successfully pinpointed Carrick’s best position – a holding center midfielder whom also, is ferocious in his transition into attack. At 31, and five title winning squads later, Carrick’s intense hunger has certainly not diminished for Manchester United. Although at times he is thought to lack the cutting edge in terms of finishing, his positional sense and awareness amongst some of the United greats must certainly not go unnoticed. Some may dig at Carrick in terms of his lack of pace or how he may disappear for a few minutes during a match; yet when the 31-year-old plays a perfectly timed 60 yard ball to a streaking Robin van Persie or Danny Welbeck – his critics are quickly silenced.

The capable two-footed central midfielder’s desire for more silverware and warning to the rest of his Manchester United comrades not to rest on their laurels, indicates his seasoned veteran thought process having seen what it takes to conquer the Premier League, and Europe. As David Moyes was appointed the new United manager, Carrick quickly supported the change and to provide full backing for Sir Alex’s successor (via North Wales Weekly News):

“As players we are embracing the challenge. For so long we have had the stability of knowing what to expect. We could turn up for pre-season and know how we would be preparing. We are all looking forward to it. We are looking forward to the new manager coming in, working with him, improving asa squad and taking the club forward.”

True desire and passion rest within the heart of the Manchester United squad – and the historic tradition at Old Trafford flows through the blood of nearly every player to throw on the United kit. The root of the challenge that Moyes faces coming into the club is to quickly retain the undivided attention from every member of the squad both old and new – an attention that Carrick and his men quickly have turned over without raising a single eyebrow.

If I were told a few seasons down the line that Michael Carrick would retain the captaincy from an aging and injury prone Nemanja Vidic, bells would be ringing in my ears. The midfield consistently picks the correct pass but at the same time has enough technique to pull off “the unthinkable” pass. Even though he is fully capable of the killer ball during the course of any match, what makes him so valuable to United is his ability to smartly distribute the ball before he becomes overrun by defenders. During a successful Premier League career, the midfielder makes his living on the simple pass and even more importantly, remaining disciplined throughout the entirety of the match despite the scoreline. Every player must play within themselves and limit the amount of controllable errors during a given match which is exactly what Michael Carrick does in order to pay his bills – and keep his starting position at Old Trafford.

During his time with United, he’s both grown in a footballing sense while also understood the rich tradition that has preceded him. His play may not be the most visually appealing but after a April 2013 nomination for the PFA Players of the Year Award for his consistent performances, positive attention continues to come his way. Arsene Wenger even stated that he cast a vote for Carrick in this years ballot stating “He is a quality passer. He could play for Barcelona, he would be perfectly suited to their game. He has a good vision and is an intelligent player.” And, as he continues his stellar anticipation in the midfield, providing support to the back four and taking the edge out of the oppositions midfielders, he may be called upon to aid in the development of Tom Cleverley whom may also provide a threat to Carrick as he continues to impress. We United fans welcome a spirited competition between those two midfielders whom we also expect a budding partnership to form under Moyes.

2 responses to “Carrick – The next United legend?”