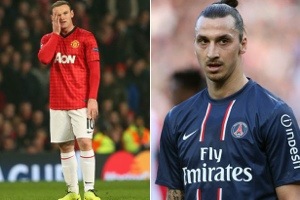 Wayne Rooney has been linked with a move to Chelsea and Bayern Munich a lot in recent months. This week, however, has seen more reports of an exit but to French champions Paris Saint-Germain. French newspaper L’Equipe claim the club has already began talks with the England international about a possible transfer this summer.

Since becoming the richest club in France and one of the richest clubs in the world thanks to oil money, PSG have found themselves linked with almost every Tom, Dick and Harry in the transfer market. That’s one of the reasons I questioned the possibility of Rooney joining the French outlet. Plus, he is not a player I would have imagined moving abroad to play football.

PSG’s owners spoke flatteringly of Rooney but distanced themselves from a move for him. However, a number of their players have spoken warmly of him, inviting him to join the project. This term ‘project’ is often flung around by filthy rich clubs without real explanation. While it may be common sense, a project sounds like something new. What PSG are doing is similar to City and, of course, Malaga before things went tits up.

After handing in a second transfer request the end seems near for Rooney, but a number of clubs are being touted to have shown interest in signing the 27-year-old. L’Equipe, however, reckon he could be heading to Paris.

The report suggests that PSG’s initial plans are to bring Wayne Rooney in to partner Zlatan Ibrahimovic, not replace the Swedish striker. And Rooney is now their apparent preferred option ahead of Napoli’s Edison Cavani.

One response to “L’Equipe Report: Talks between Rooney & PSG begin”