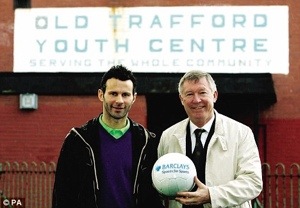 The most decorated English footballer in history capped off another season with Manchester United – with his 13th Premier League medal around his neck. The star-studded career continues onwards as Ryan Giggs signed a new one-year contract with United on March 1st, 2013 which extends his stay with the Reds until June 2014. As his long-time midfield comrade Paul Scholes, is now in retirement along with the worlds best professor in Sir Alex Ferguson, the 39-year-old will now be relied upon to carry out the historic tradition that is, Manchester United. Since his senior career began in 1990-91, Giggs has really only known one manager and with the recent appointment of David Moyes, the support and drive will certainly only heighten in his continued role with the club. Over 900 appearances and 114 goals later, the once menacing attacker has developed into a deeper lying midfielder whom nearing the age of 40, still provides the abilities to change a match.

Ryan Giggs will go down as one the worlds best footballers, to never appear in a World Cup. Having retired from the Welsh international squad in 2007, that one move may have just been the key to his long term success. As he placed his sole focus on Manchester United throughout the entirety of his career, Giggs has been able to prolong his career and sustain fitness of what seems, a teenager. Although Giggs was never able to grace the world with a presence in the World Cup he was however able to captain Great Britain in the 2012 Summer Olympics – another feat to add to his expansive resume.

Manchester United’s “boy-wonder” has quickly turned into United’s heart and soul. At 17, with pace to burn and plenty to prove, Giggs found himself in the starting XI amongst some of the greats – especially that of Bryan Robson. With Robson at the helm Sir Alex also featured the youngster alongside Eric Cantona, Paul Ince and Mark Hughes all of whom contributed to the development of a truly special individual. Amongst the greats of Manchester United he has been able to produce numerous memorable moments of his own – of course who could forget his brilliant solo effort against Arsenal in the 1999 FA Cup semi-final. The privilege of playing amongst some of the best talents in the world, the United mainstay was able to earn the PFA Young Player of the Year Award in 2002 – another title which occurred over a decade ago. A midfielder with plenty of pace at the age of 25, has now transitioned into a more intelligent member of the Red Devils whom turned his play into a deeper role in recent seasons.

With a pop-star face and a left-footed cannon for a shot, Giggsy will help bridge the divide between Moyes and the current members of the United faithful. Over a decade later the Welshman is no stranger to success in terms of silverware, an area of concern for some Manchester United supporters in terms of Moyes’ credentials; however, with 13 Premier League Titles, and 6 PFA Team of the Year selections under his belt, he will certainly be one of the first to welcome Moyes to a true football dynasty (via The Telegraph):

“What David Moyes is coming into is a good atmosphere, a really good bunch of lads, very good players and a really strong squad, so it is a strong bunch position to be in. But the downside is that you have to follow the most successful manager that has ever lived […] We have a really good bunch of lads in the dressing room and, whenever the manager needs help, the more experienced players will help. That has been the norm, ever since I have been in the club.”

At the moment, United seem to possess the perfect amount of youth in their squad with a number of veterans to allow for prime development over the next 2-3 seasons. Nemanja Vidic and Rio Ferdinand will continue to prime the likes of Jonny Evans and Phil Jones in their defensive duties, while Ryan Giggs lends a helping hand to that of Shinji Kagawa and Tom Cleverley while also placing a special emphasis on the skill set of Ashley Young and Antonio Valencia.

Recounting his days as a young teenager before training, the 39-year-old remembers Gary Pallister, Eric Cantona and Bryan Robson sitting with Sir Alex having tea and joking around – something that he himself has been involved in his late 30’s. The friendly but stern atmosphere at the club “is how it has always been here. The experienced players have always had a good relationship with the staff and helped each other along.” Through the numerous tea times and locker room pep-talks, Ryan Giggs himself has enabled the entirety of Manchester United to get behind their future manager, with their undivided attention.

The undivided attention to detail that the entire Manchester United squads in the past and present along with management possess, has allowed nearly each and every player to thrive in a never-ending circle of success. Sir Alex has been able to breed players of Giggs’ ability, yet the true testament to his character is that of his guaranteed level of performance whenever called upon. The elite status that he’s offered United makes him Manchester United’s Player of the Decade along with his knowledge of his own skill-set. Giggs still has the lungs and drive of a teenager; however his technical ability and tactical awareness have truly allowed this one star player in particular, to carry forward in a storied career.

Call him what you’d like: a freak of nature, a maniac, a man on a mission – but I’d like to call him, our legend. Ryan Giggs’ almost unreal career continues onwards for another season at least, and if we could have him play until the last possible moments, we surely would. A man who has humbled the world of football with his almost unreal feat, will test himself and his teammates again this summer to prepare for another legendary season ahead. Simply put – Ryan Giggs is a firm part of Manchester United’s legacy, but now charters the perfect mix of veteran and youth members into a new chapter of their history.

5 responses to “The United Legacy: Giggs continues without Ferguson”