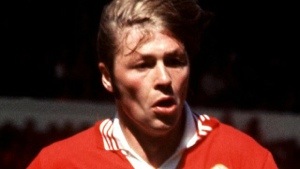 Former Manchester United and England star Brian Greenhoff passed away in his Rochdale home this morning at the age of 60.

Brian, who was born in Barnsley, joined United in 1968 after representing Yorkshire Schoolboys. He made 271 appearances for the Reds and played in the same team as his brother, Jimmy, who the club signed in 1976.

The highlights of Brian Greenhoff’s career came in 1975 when he won a Second Division winners medal and in 1977 he lifted the FA Cup.

Recognised as one of our own in the Stretford End, Brian was always keen to engage with fans. It was only recently I interacted with him in regard to his playing days with Manchester United and England. He offered great insight and explained to me how the image of international football has changed, describing the pride he held representing his country.

Brian left United in 1979 for Leeds and played for another two clubs before retiring in 1984. In the last year or so he has devoted time to writing an autobiography that was foreword by Tommy Docherty, who described him as “a manager’s dream.”

Our thoughts are with Brian Greenhoff’s family.