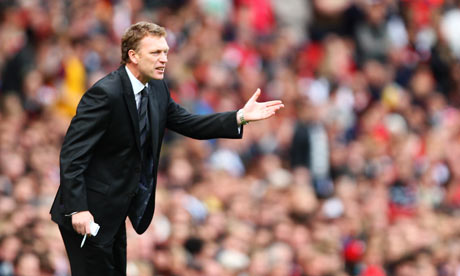 They opened a new shopping centre in Liverpool recently, down by the docks. Liverpool Football Club quickly snapped up the first retail outlet as soon as it became available. Turned it into a club shop. It was lot one, so they called it ‘Liverpool One’. Everton Football Club were a little slower off the mark, but eventually took the next unit on offer, which was a couple doors down. They called it Everton Two (Liverpool 1-2 Everton). That famous Scouse wit, eh?

Actually, it sounds a lot like something City would do – witness their ‘amusing’ Carlos Tevez poster when he slunk out of MUFC and into MCFC. And there is a very real sense that David Moyes, in moving from Everton to Manchester United, is moving from a club with a city-style ‘second club in the city’ mentality, to the undisputed number one. Despite finishing above rivals Liverpool in the past two seasons, Everton remain obsessed with their rivals from across Stanley Park. Finishing above Liverpool was the main target of many of the supporters this season. And some might say for Moyes too – witness his team’s “craven capitulation” against Wigan at home in the FA Cup quarter final this year, in a competition which was surely their best chance of a trophy under Moyes.

Sir Alex Ferguson has already warned David Moyes that his biggest challenge upon taking the United reins will be getting his head around just how big United are. We’re a global ‘brand’. What we do matters outside the walls of the city. What we do matters in South Africa, in Japan, in Norway, in Mexico, in USA! USA! USA! And everywhere in between. Fans in Manchester don’t just want us to finish above Liverpool and city, we want to win trophies. We want to compete for honours on the European stage. We want the club to sign the biggest and best players. The Bales, the Ronaldos. Not, perhaps, the Baineses, the Wanyamas.

I want David Moyes to do well at United. If Fergie thinks he’s the right choice for his successor, then I’m quite happy to agree with him. For now, up to a point. You can make stats do whatever it is you want them to do, but under Moyes, Everton lost only once at Goodison Park all campaign. (United, by contrast, lost three). I’d be quite happy for him to maintain a home record like that at OT.

Another one: Everton had exactly the same number of defeats (7) as United in the past 46 league games. In that time, Chelsea’s rent boys lost 10.

But those stats disguise the fact Everton made a hell of a lot of draws: 21 in all, throughout the 2012-13 season. United have made it a habit over the past few seasons never to draw. Or hardly ever, anyway. We didn’t draw a single game at OT this season, and drew 5 away, one of which was the ridiculous, testimonial-style 5-5 against West Brom on that emotional final day. Another was against Arsenal, in the week we finally secured the title. The players seemed half-cut for the first half hour of that game – too much partying – and Arsenal battered us. Still, despite all that, United should have won the game, based on chances created.

You see, under Ferg, we’ve excelled at turning draws into wins. We’ve found that extra drive, desire, and determination to go on and win the game. Often we score late winners. In Fergie Time. We know draws are no good. A team can complete the season ‘invincible’, but, if they draw every game, they’ll go down.

On the day United collected the Premier League trophy, after a home win against Swansea, Everton were away at Liverpool. They drew 0-0. Towards the end of the match, it appeared both teams were happy to settle for a point apiece. United, under Fergie, would never settle for a draw. We would drive on for the win, at all costs. Sometimes this hurt us – remember how we chased the game at 3-1 down against city (and how city cut through our ragged back-line)? But it has been written into the DNA of the team, thanks to Fergie.

If Moyes learns one thing, he needs to learn this, and quickly. At United we won’t be satisfied with draws. We have to chase 3 points rather than 1. We have to roll the dice. It is this quality – amongst many others – that makes being a United fan so exciting. We chase games down when other teams would give up, settle.

Here’s hoping there’ll be no ‘luck of the draw’ next season. No. We need to make our own luck. Grind out those wins. And sure you can talk about comparative resources and net spend all you want, but United need to win, and win, and win.

You win leagues by winning matches. Sounds simple, but Moyes needs to learn that draws simply won’t cut it here. Remember that joke about the stores at the shopping centre, Dave: it wasn’t Liverpool 1-1 Everton. It was one-two.

Andrew J Kirby is the author of ‘Fergie’s Finest’, which was released this month, and by no means cashes in on Fergie’s retirement… Take a look on Amazon now. Here is the paperback version.

Andrew J Kirby’s sports writing has featured in BBC Sport magazine, and on the Radio Five Live website. He has written for Stretty News and Old Trafford Faithful blog sites. He has held a Manchester United season ticket for the entirety of the Sir Alex Ferguson reign at Old Trafford, and regularly follows the Reds across Europe and beyond.

9 responses to “David Moyes – The luck of the draw”