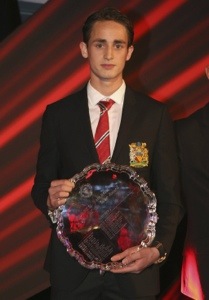 Ever since we were treated to the unprecedentedly gifted, select bunch that were the class of ’92, something we have never seen the like of again, the drive and desire to see another group or couple of individuals as equally talented as their predecessors such as Beckham, Giggs and Scholes has been of the feverish kind.

There is seldom a more heart-warming or grin-inducing feeling from a footballing perspective than seeing young hand-picked homegrown fruit trying to embark on their first steps towards a distinguished career of greatness. Look back to a memorable debut from one of the most recently graduated academy products- Danny Welbeck crashed in a beauty from range against Stoke in a 5-0 demolition and the goal brought scenes of unbridled ecstasy, a moment that still lives long in the memory. Just as stunning a contribution came in the form of a fresh-faced Italian few had heard of- that swivel and unerringly accurate finish from Kiko Macheda had many dreaming that we had a superstar on our hands, Andy Gray even went as far to say ‘a star was born’.

The point to make from these two stunning impacts is that the two have had strikingly contrasting fortunes. Welbeck has now established himself as United’s newly-christened ‘big-game’ player; Macheda must be wondering where it all went wrong (as we all are) and his career can be diplomatically described as currently faltering. The further point from this is to highlight that we can easily get long-sighted and get swept away in a wave of uncontrollable euphoria. Which brings me to the focus of attention of this piece.

One thing incoming manager David Moyes could have been assured of whilst enjoying his five-course meal at the LMA meeting last night was the fact the future looks very rosy and bright. One of the Moyes promises was his vehemence towards youth development and honouring the United traditions that have stood the test of time in bringing through academy graduates. He would have appreciated the text messages coming through that in typical United fashion, a 0-2 deficit was transformed into a stunning second-half comeback and as is customary a last-minute winner from Larnell Cole, who also bagged the equaliser.

The 3-2 turnaround last night breathed hope and justified optimism that our forseeable future is in safe hands and that a couple of youngsters have a super chance to become the next Evans, Cleverley or Welbeck. However, one struck the eye as looking as the real deal.

Every year, there appears to be a diamond nestled in the United crown, years before this have seen Cleverley and Pogba stand out as the star individuals and their careers are taking an upward curve. The same will hopefully be said in a few years of this year’s star performer, a fresh-faced young Belgian (yes, another young Belgian off their newly illustrious conveyor belt).

As many know by now as the guy is creating a fuss for the right reasons, he goes by the name of Adnan Januzaj. At a tender 18 years old, he was not the oldest player on show at Old Trafford last night, but he was by far the best player on the pitch. For those who have not seen Januzaj’s talents on a regular basis, things you notice very quickly are his mobility and his balance- he is very hard to dispossess, the ball sticks to him which you would not normally associate with such a slight stature but he has that in his locker.

The ball seemed glued to his feet when in possession, he is no slouch across the turf and he offers us something that we have not had since Ryan Giggs was in his pomp, a genuine winger with a sweet left foot. The majority of everything good about the under 21’s play and comeback centred around the excellence of Januzaj, whenever he received the ball the crowd was on the edge of their seat and expected something brilliant to happen. Januzaj is also very adept from dead-ball delivery, his set-piece delivery caused a few problems for the Tottenham rearguard. His touch is second-to-none, in short he is a nimble, fleet-footed, very technically gifted winger who can go far.

It was a well-known fact that Sir Alex Ferguson, the recently retired United manager, would back his youngsters to the hills regardless of age, natural talent or appearances. However, rarely has anyone seen Ferguson rave or wax lyrical so much about a player who is still yet to make his senior debut than this appraisal on the young Belgian Januzaj, “Adnan is a beautifully balanced player. He’s only 18 and still to grow into his frame. But he has good balance, good acceleration and he’s a very good technical player.”

What is of paramount importance is that Januzaj is not another gem of the future or present to get lost in the system. With our wingers severely underperforming this campaign, and Nani almost certainly to be the victim of such lax displays, there could easily be a spot around the first-team: Wilfried Zaha and Januzaj could provide a brash, youthful exuberance to challenge the more established faces of Young and Valencia.

What was apparent was that Januzaj is ready for a crack at the first-team, if David Moyes is true to his word he could be thrown in at the deep end and make a good fist of it.

If Januzaj’s progress is not stifled or blighted, we have a potential star on our hands.

5 responses to “Why Januzaj could be the next star”