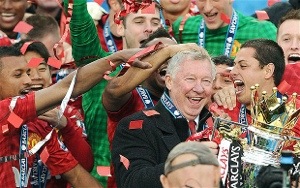 About 27 years ago, a legend began to form as Sir Alex Ferguson turned from a little known boss to one of the world’s most looked up to managers. As the Scot goes out as a Premier League Champion, a thunderous up and down 5-5 draw at The Hawthorns may not have been the way he would have liked to end his managerial career – but nonetheless, onwards and upwards for Manchester United. Michael Carrick noted (via The Telegraph):

“We’ve thanked the manager for everything he’s done and he’s thanked us. We’re ready to move on, and there are new challenges for all of us. We’re looking forward to it. The manager wanted to win but the job for the season is done. I’m sure he can retire very satisfied.”

Capping off a trophy ladened career with United’s 20th Barclays Premier League title certainly makes retiring a bit easier for Sir Alex, yet questions remain about the next generations of the club and which direction we are heading. The answer to any pending questions of whether or not United will falter under a new manager – is no. In the grand scheme of football, United will continue to press on with their unique blend of youth and veterans who carry both the knowledge passed along by Sir Alex, and the newer players like Tom Cleverley, Shinji Kagawa and Robin van Persie who just in one to two seasons have molded into more complete players. Although Ferguson was unable to touch the footballing hearts of the younger players as much as he was able to with Ryan Giggs, Nemanja Vidic or Paul Scholes, the passion will forever remain in their blood.

Now, a true changing of the guard will be in order this summer, but if the stars align properly there is no doubt that United will once again challenge for every domestic and European trophy within their grasps. As United transitions between the historic days of Sir Alex over to a major trophy-less David Moyes, nothing but positives will be drawn upon as United resume training under Moyes on July 1st. Of course, there are going to be bumps in the road, but despite any potential turmoil the former Everton manager’s 6 year contract indicate he will be given time at Manchester United to develop. Moyes will have newly acquired resources in which he did not have at Everton, and a club rich of history with a framework in place. At 50, Moyes could be in prime position to retain the managerial position at United for the next 30 years should success come his way (and a few trophies as well).

The numerous positives that surround Manchester United, still give way to a few questions that are beginning to arise around the rumour mill, and even proper playing time issues. First matters, David Moyes let Wayne Rooney walk away from the Toffees years ago, can he keep ahold of the 27-year-old this time around? One of the mainstay’s at United, Rooney has quickly become the face of the historic club and certainly made a name for himself – especially featuring in the number one jersey sales for the Premier League.

Wayne Rooney is, nor will never have blistering pace like Cristiano Ronaldo or score 90 goals in a calendar year, but he does not need to. The current makeup of the Manchester United squad allows the English midfielder/forward to thrive in a sunken secondary striker role allowing him acres of space in the center of the park. Michael Carrick and Tom Cleverley certainly provide stability and can easily retain possession, while Rooney serves as the vital link between the forwards and that of a new-age United defense that will likely take form in the coming seasons.

Although Rooney possesses the world-class quality that should bring United an attacking edge, his future at Old Trafford may now be tainted with his recent second transfer request and is the 27-year-old’s second formal request. Yes, we can let one non-logical thought processed moment go; however, as he seems to be further distancing himself from both Sir Alex and Manchester United, the future remains uncertain.

And where to we begin with Hernandez? The highly unused forward often times played third or fourth fiddle to Robin van Persie, Wayne Rooney, and Danny Welbeck. The Mexican international proved his worth this season and why he is such a prolific scorer – even tallying the last goal under the tutelage of Sir Alex in the draw against West Brom. Despite the limited minutes, the Mexican talisman makes the most of his appearances and seizes nearly every opportunity in front of net. El Matador may leave Old Trafford should he not see an increase in minutes under Moyes – and in my opinion, rightly so.

It’s possible that Chicharito remained so calm with his cameo performances because he felt he owed a debt to Sir Alex for bringing him to the club in the first place. Javier Hernandez told MUTV:

“The impact that Sir Alex has had on me is massive. He gave me this big chance to play at the biggest club in the world. He has taught me a lot and I only have thankful words for him. It [Sir Alex’s retirement] is not only a loss for the British fans but he has changed the football across the world.”

The respect in the Manchester United squad is uncanny in today’s modern football. Hernandez has been the epitome of a true leadership and class during his time with United as he continues to impress from both his statements as he rides his time on the bench, while also thriving from his striking role in the Premier League. Moyes should be hard pressed to keep ahold of the Mexican frontman for the coming seasons as RVP is surely a prolific goal-scorer, but Chicharito adds a speed dimension allowing for additional space to become available to the flying Dutchman and his comrades.

In the end, this is only the end of a managers career – and not the end to United’s success. Sir Alex is and was, one of a kind in his profession. So, it’s okay, as I am still left stunned another manager will take over Old Trafford this summer. However, as Sir Alex Ferguson wants the same undying support for the club and himself, to be translated over towards the upcoming season. Relish the glorious last season from our fabled club – and cheers to the never ending trophies to come.

7 responses to “Who must United keep ahold of this summer?”