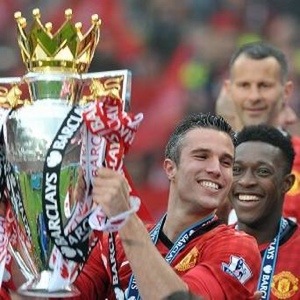 It might be the end of an era at Old Trafford following the retirement of Sir Alex Ferguson but Robin van Persie is eyeing-up the start of a new one under David Moyes.

Van Persie had grown increasingly frustrated at his failure to add to the FA Cup he won with Arsenal in 2005, therefore made the move to Old Trafford last summer. Not only has he won a Premier League medal since joining United but the golden boot for the second year running.

But it doesn’t end there for the Dutchman.

“I am not thinking I have my medal and this is it,” Van Persie told MUTV. “It tastes beautiful. But I know how it feels now and I want more. That is the idea of all the lads. It is a great feeling to achieve it. We can enjoy it. It only gives you the taste for more. Hopefully next season we can win the double.”

The move was always going to upset Arsenal fans. He was their captain and best player; one they should a large deal of loyalty to. But the reason he made the move was a no brainer. When you look at the best players to play the game, you take note of their achievements. A player of Van Persie’s class deserves to have league and European titles to his name. At Arsenal, that wasn’t happening.

“I do think it is important for a player to win medals,” he said. “You play football to win. If you add up all those wins it has to end up in a big trophy.”

One response to “Van Persie hungry for more success”