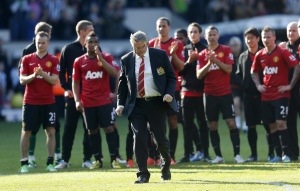 Following Manchester United’s 5-5 draw against West Brom, Sir Alex Ferguson walked towards the away support to pay tribute after their 26 years of support.

Throughout the game the United faithful sang about David Moyes just a week after Ferguson warned them about getting behind their new manager. “So come on David Moyes, play like Fergie’s boys. We’ll go wild, wild, wild.”

Saying goodbye for the last time, Ferguson bowed towards the fans and blew a kiss. Thanks for everything, boss.

One response to “Ferguson pays tribute to the United faithful”