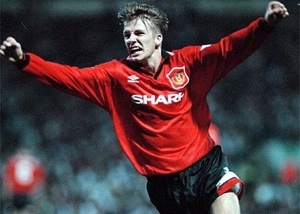 Makes you feel a tad old doesn’t it? The class of ’92 – who United fans will always remember as fresh-faced and dodgy haircutted – are slipping, one by one, into that good night of retirement.

Nicky Butt went years ago. There were some observers said his moves to Newcastle and Birmingham were retirements in themselves. Gary Neville went a while back, without pomp or ceremony. He took a hard decision and stuck by it, and is now working wonders as a pundit on Sky. Scholes (although not strictly a class of ’92 graduate) went too, then came back, then went again. Phil Neville (who, like Scholes was in the year below) announced he is leaving Everton. His next role will most likely combine coaching and playing. Unless he joins United, under Moyes. Or he might just stay at Everton. But if he did, I don’t think he’s sentimental, or selfish, enough to pick himself.

Giggsy carries on regardless, of course. But he’s a “freak” (Fergie’s words).

This week, David Beckham called time on his career, after a string of off-the-pace performances for Paris Saint Germain. And sure, in his short spell in France, he’s shown flashes of his former brilliance – for twenty minutes against Barcelona before they started teasing him like matadors and he came over all wounded animal and got booked for a late tackle. But most of the time he’s seemed frustrated at his waning powers: witness his sending-off a couple of weeks ago. Becks’ swansong has, sadly, resembled an extended, Director’s Cut version of his great pal Gary Neville’s last game for the Reds, against West Brom on New Years Day 2011, when Red Nev blundered around as though he was a hungover fan who’d won a competition. Gaz might have given away three penalties that day.

But, as Becks finally hangs up his boots – no, not the ones Fergie flung at him – it’s worth remembering him in the good old days. I’ve recently completed a book on Sir Alex Ferguson’s greatest Manchester United x11 (Fergie’s Finest: look it up), and one of the toughest choices I had to make was between the mighty Cristiano Ronaldo, and ‘our own’ Becks, for the right-wing berth. I wavered between one and the other right until the moment of publication. One thing that nearly swung it for me was an interview I saw on Sky Sports News with Becks. Becks was paying homage to Fergie, comparing Sir Alex to our other great Scot, Sir Matt. He talked about how, as a youngster, he used to wander the corridors of the stadium and the Cliff. How he could still recall the smell of Sir Matt’s pipe-baccy. How that made such an impression on him then. He implied Ferguson would leave his own smell behind. Sir Alex had written himself into the fabric, the DNA of the club in a way only a select few could.

Well, memories like these made me remember David Beckham was/ is part of the fabric of the club too.

David Beckham wears his Red heart on his sleeve. Maybe you can’t quite spot it under all the tattoos, but it is there, and it will be forever more.

From the very beginning, we’ve seen the pure, boyish enthusiasm Becks exhibits when playing for, talking about, or watching United. We’ve tracked his career from the very early days, when he lived in digs in Manchester and felt homesick for his Essex home. We feel almost paternal towards him. We stood up for him, allowed him to keep his head when all of England was losing theirs after he departed the 1998 World Cup in disgrace, having been sent-off against Argentina for a silly flick of his leg against Diego Simeone. We chanted his name when effigies of the young starlet were being hung from lamp-posts outside pubs in his native East End of London. We gave him rapturous applause – more acclaim than we afforded even those in red shirts – when he returned to Old Trafford with one of his new clubs, AC Milan.

We loved his free-kicks, his pinpoint-accurate crosses, his corner kicks in European Cup finals, his goals from his own half. We loved him because he fitted the number 7 shirt. For the way he wore the green and gold scarf.

We loved him because throughout his long and lavishly successful career, a career in which he eventually collected as many clubs as Colin Montgomerie, he maintained he’d never play for another English club after Manchester United. Because he admitted Manchester United was the pinnacle, the top of the mountain, and after United, there was only one way: down. Because he knew he’d feel dirty, like a cheating husband (we’ll leave all of that to Hello) if he were ever expected to wear the shirt of another English team.

So goodbye Becks. It’s been emotional. You were an international celeb, England captain, media-savvy pants-model. You trousered £165m during your career. But you’ll always be a Red, like us.

In other footy news, here’s another former great showing an alternative way of dealing with the media. This from an Argentinian journo on Diego Maradona’s return to his native country after a spell in the Middle East: “On the way, in heavy rain, Maradona made the car stop, got out with a Havana cigar in his hand, took some stones from the edge of the highway and started throwing them at reporters’ cars and kicked a photographer’s leg.”

There’s many ways to rage against the dying of the light. I for one, reckon Becks’ll go with a little more dignity (though it might be a tad less funny).

ABOUT THE AUTHOR
Andrew J Kirby is the author of ‘Fergie’s Finest’, which was released last week, and by no means cashes in on Fergie’s retirement… Take a look on Amazon now.

One response to “Pipe-smoke on the winds of change: David Beckham – a retirement tribute”