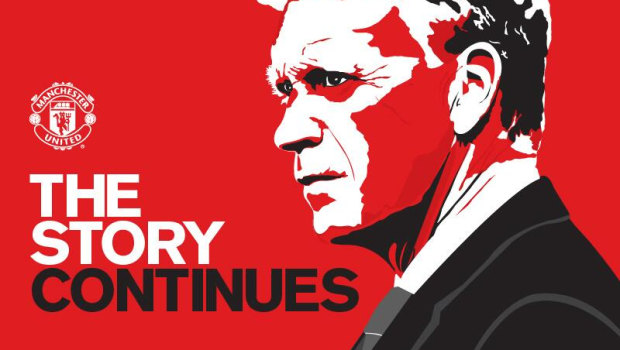 So, there we have it. Over the past couple of days, Sir Alex Ferguson took charge of his final home game at Old Trafford and Manchester was painted Red as United’s record 20th league title was being paraded around the city. Quite fittingly, it was a late goal on Sunday – a blistering effort from Rio Ferdinand from six yards – in the 87th minute that helped dispatch of a Swansea side looking to spoil United’s 20th title celebrations.

The emotions were running high before and during the game but it was a moment after the game that reduced grown men (including myself) to tears – Fergie’s farewell speech. It finally hit home that he’ll no longer be the Boss.

His speech was typically dignified, respectful, uplifting but most importantly, he stressed with every fan to stand by “our new manager.”

It was confirmed almost 24 hours after Sir Alex had announced his retirement that David Moyes would be taking over at the Old Trafford helm – a decision which was met with the disapproval of many United fans.

There were comments ranging from “he’s not fit to replace Fergie” to “he’s won nothing with Everton” and my favourite one of the lot, “if he takes over, I’m leaving United too and supporting Spurs.” Imbecilic, I know.

Moyes may not bring the same ‘glamour’ as Mourinho but he brings dignity and passion. There’ll be no poking opposition team staff in the eye as well as petulantly leaving the pitch before the full-time whistle has blown because his team are losing.

There won’t be any publicity stunts such as predicting the opponents’ starting XI the day before or even naming his own team before a crucial Champion’s League tie and still getting eliminated. It’s just not the Manchester United way. What David Moyes brings is humanity and humility. He comes with a humble personality and a very efficient record with Everton – despite not winning a single trophy with them. Strange, you say.

That figure (£16.9m) is even more impressive when you look at the players that he has signed; Leighton Baines, Tim Cahill, Marouane Fellaini, Phil Jagielka over the years and more recently, Belgian starlet Kevin Mirallas. In the January transfer window, Everton were also poised to sign Leroy Fer, the explosive midfielder from FC Twente until the transfer fell through.

His ability to breed youngsters as well as nurture local talent cannot go unnoticed. Arguably the greatest English talent of the last 10 years has come from the Everton academy. I don’t even need to name him. You all know who he is. Not only him, there’s been Jack Rodwell (who since has made a move to City) and highly revered Ross Barkley is the latest one off the conveyor belt. Not a huge amount of players but if you think about the resources that were available to him, he’s done a bloody good job.

United incidentally, have a net spending figure of £170.9m in that same list. With the squad that David Moyes is inheriting from Sir Alex, could you even begin to imagine what he’d be able to do with United?

The decision to appoint him ahead of Mourinho (who’s strangely been a favourite for years) is the most logical choice for the club because as Sir Alex has said many times in the past,” nobody is bigger than the club.” Mourinho would have been. He’d have been too arrogant to accept any advice from Sir Alex. He’d constantly be jeopardising the welfare of the club and his relationship with the fans.

His antics on the sidelines, while they are comical to witness, make you cringe at the thought of him doing that as a Manchester United manager. Also, he’s constantly in need of “newer challenges”. He would have been the wrong choice.

Moyes, on the other hand, is a humble and loyal individual. We need to accept that he’s not going to win 10 trophies in his first six years (although we would like him to). Nobody is going to replicate Sir Alex. Once we do that, it becomes a lot easier to accept him as the perfect candidate to replace the greatest football manager in history.

Everything that he’s accomplished at Everton – taking them from towards the bottom of the table to a solid, top 10 team constantly challenging to compete in Europe – in the past 11 years goes to show how quickly he can transform and improve a team. At United, all he needs to do is improve. He’s inheriting a championship winning side and with his managerial skills getting an upgrade, United will provide him with the tools to operationalise his ideas. At Everton he was always limited. It’s not to say that it’s going to be easy for him to manage Manchester United, but it’s a challenge he’ll relish taking on.

At United, there is no real disadvantage. The facilities at Carrington are among the best in the world, the quality of the team is VERY high, he’ll be given a considerably larger transfer budget, Champion’s League football, and the guarantee of competing for trophies every season – the list can go on. All he can really do is take the club higher. Everything he’s achieved at Everton seems to back that claim up.

Besides, if Sir Alex Ferguson had a big say in the decision then who are we to question him? Going back to the speech from Sunday, Sir Alex finished by saying, “I’d also like to remind you, that when we had bad times here the club stood by me, all my staff stood by me, (and) the players stood by me. Your job now is to stand by our new manager.”

That’s a stark reminder of what United could have missed out on had Sir Alex hastily been sacked back in 1990 when it all went bad. But he was given trust, time and support, so let’s not forget where that led him. Instead, let’s trust Fergie’s judgement because over the past 26 years, he’s never let Manchester United down and I don’t think he’s about to start now.

One response to “David Moyes – The Story Continues”